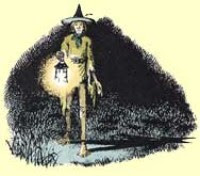 I’d like you to consider a brief theological statement from The Silver Chair, one of the Narnia novels of C.S. Lewis.

To set the stage: our heroes are prisoners of the Witch in her dark and dreary Underworld, and she’s trying to convince them that Narnia, the world on the surface, under the sun and sky, does not exist. To help her do this, she has cast a magic spell on them. (Magic is a wonderful short-cut. That’s why I don’t use it in my Bell Mountain novels.) But even with the magic in play, Puddleglum continues to resist her evil teaching. And this is what he says.

“…I won’t deny any of what you’ve said. But there’s one thing more to be said, even so. Suppose we have only dreamed, or made up, all those things–trees and grass and sun and moon and stars, and Aslan himself. Suppose we have. Then all I can say is that, in that case, the made-up things seem a good deal more important than the real ones. Suppose this black pit of a kingdom of yours is the only world. Well, it strikes me as a pretty poor one. And that’s a funny thing, when you come to think of it. We’re just babies making up a game, if you’re right. But four babies playing a game can make a play-world which licks your real world hollow. That’s why I’m going to stand by the play-world. I’m on Aslan’s side even if there isn’t any Aslan to lead it. [For “Aslan” read “Jesus Christ”–editor.] I’m going to live as like a Narnian as I can even if there isn’t any Narnia…”

I have always liked the sound of this, but lately–I guess in light of recent current events–I’m not sure what to make of it.

It’s hard to see Christ’s Kingdom in this fallen world; but can we even entertain the notion that Christ’s Kingdom isn’t real? No, we can’t–because God has said it’s real. Let God be true, but every man a liar. (Romans 3:4) This fallen world, this “real” world, where everything “is what it is,” where you can’t fight city hall–we have God’s word for it that this world shall pass away: but Christ’s Kingdom shall not pass away. Instead, as God promised Daniel, it will grow into a measureless mountain which “shall never be destroyed; and the kingdom shall not be left to other people, but it shall break in pieces and consume all these kingdoms, and it shall stand forever.” (Daniel 2:44)

Knowing that C.S. Lewis believed God’s word, how do you interpret Puddleglum’s statement?