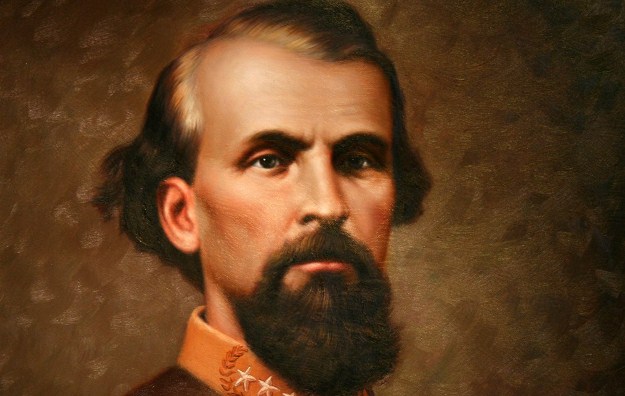 They’re on a roll now, trashing marriage, stuffing their Organized Sodomy “rainbow” under everybody’s noses, banning the Confederate flag, defacing monuments, and so on.

Now the mayor of Memphis, TN, wants Confederate General Nathan Bedford Forrest dug up, along with Mrs. Forrest, evicted from his tomb, and his monument torn down.

I know this’ll get libs mad at me, but here are some facts.

*Before the Civil War, Forrest was a wealthy planter and slave trader. These activities were lawful in that time and place.

*With no military experience, training, or study, Forrest joined the Confederate Army, rose rapidly to the rank of lieutenant general, and became one of the most gifted and effective soldiers in American military history.

*After the war, Forrest was a founder of the Ku Klux Klan, and its first “grand wizard.” (That must have sounded better in the 19th century than it does today.)

*Forrest tried to dissolve the Klan, and then resigned from it, saying it had deserted its original mission of defending the South from being ruined and pillaged by the North.

*Although depicted in the Northern newspapers as a habitual war criminal, Forrest was never formally charged with any war crimes. (No Union officer, of course, was ever even mentioned in any postwar discussion of war crimes.) Bear in mind that the government did execute a number of Southern officers for war crimes.

*Forrest died in 1877. In 1905, the city of Memphis erected a statue to him and he and Mrs. Forrest were entombed beneath it.

*Starting in the 1980s, the NAACP, CORE, and other African-American organizations began to protest the monument, demanding that General and Mrs. Forrest be dug up and buried somewhere else.

The man died 138 years ago. Because his side lost the war, and because statists are in the driver’s seat today, the Confederacy is now depicted as an evil empire solely devoted to preserving slavery: which is not a fact.

If Forrest’s side had won the war, would they be demanding today that General and Mrs. Sherman be dug up? Had the South won, Sherman would have doubtlessly been prosecuted for massive crimes against the civilian population.

But liberals do not accept history any more than they accept facts. “Feelings” are everything.

So they desecrate the dead, who cannot defend themselves.

They can be thankful Bedford Forrest is not still alive.

One comment on “Libs Make War on the Dead”