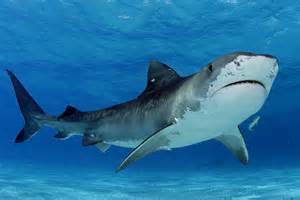 Let us stroll down Memory Lane to Sydney, Australia, 1935, and one of the most strange and baffling murder  mysteries of all time: the “Shark Arm Murders” ( https://en.wikipedia.org/wiki/Shark_Arm_case ).

Why does it have such a weird name? Attendez-vous.

Some Australian fishermen caught, alive, a 14.5-foot tiger shark and brought it to the city aquarium. The big shark did nothing for a week, and didn’t eat, but then fell ill and vomited up a bunch of interesting objects–including a severed human arm. (Note: I’m going by the account of the case given in The Book of Sharks by Richard Ellis, Knopf, New York, 1989, which differs from the Wikipedia article in a few details.)

They killed the shark–for no good reason I can think of–but the medical examiner found that the arm had been removed from its original owner by dint of a very sharp knife. The shark had certainly not bitten it off.

Based on fingerprints, and a well-preserved tattoo of two boxers, investigators were able to identify the owner of the arm–an ex-boxer now augmenting his income by being a police informant. He was in a risky line of work, and I suppose it caught up to him. He went missing some days before the fishermen caught the shark, and was never seen or heard from again.

Anyhow, detectives did their best, they finally arrested someone whom they considered a highly likely suspect, but the court said it couldn’t render a Guilty verdict on the  basis of a loose arm in the belly of the shark. (Offstage we hear Robert Shaw singing, “Farewell and adieu to ye, fair Spanish ladies…”)

There’s some controversy about whether the arm was actually inside the great big tiger shark or the much smaller shark swallowed by the tiger earlier. We shall let Mr. Ellis have the last word.

“An animal so indiscriminate in its eating habits that it eats coal, boat cushions, and tom-toms, would be only too eager to taste a swimmer or a diver–which must look more edible than an unopened can of salmon. Perhaps the label was still on the can; maybe tiger sharks can read.” (pg. 126)