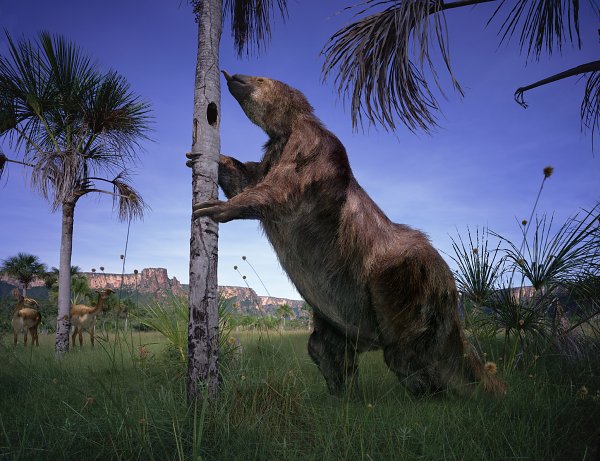 This is from before we all went sloth-mad:

There were a lot of ground sloths, once upon a time. They were all big, and the biggest one, Megatherium, was bigger than an elephant. Artists used to show them being preyed on by saber-toothed cats, but that was before we learned that Megatherium was virtually immune to attack by anything short of an anti-tank gun.

I have lived in Metuchen, NJ, all my life. I have been married to my wife Patricia since 1977. I am a former newspaper editor and reporter. I was also the owner-operator of my own small business for several years. I wrote various novels and short stories published during 1980s and 1990s. I am a long-time student of judo and Japanese swordsmanship (kenjutsu). I also play chess, basketball, and military and sports simulations. END_OF_DOCUMENT_TOKEN_TO_BE_REPLACED
This entry was posted on Wednesday, July 11th, 2018 at 9:57 am and tagged with ground sloths, Megatherium, mr. nature, prehistoric animals and posted in nature, Video. You can follow any responses to this entry through the RSS 2.0 feed.
« By Request, ‘Come Holy Spirit, Fall Afresh on Me’
Hillary’s Supreme Court Picks »