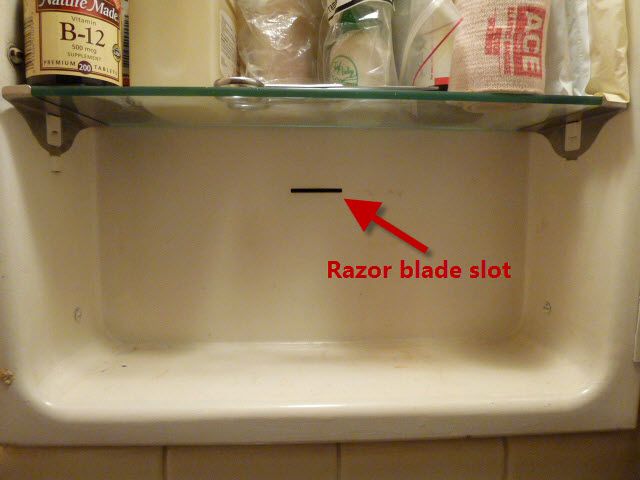 I don’t know about new medicine cabinets in new houses and apartments, but most of the old ones had these slots for razor blade disposal. After all, just because a blade won’t give you a smooth shave anymore doesn’t mean it won’t cut you if you handle it carelessly. So they used to have this slot in the medicine cabinet, and you got rid of an old blade by pushing it into the slot. Out of sight, out of mind.

Where do those blades go? Into some limbo between your walls, probably. And woe, woe, woe betide the careless contractor who remodels a bathroom because he thrusts his hands into a space without first making sure it’s not full of nasty old razor blades.

Think of them piling up back there, year after year, generation after generation: bitter, resentful, even more dangerous now that they’re rusty and dirty, waiting and waiting for payback time…

One contractor reported finding literally thousands of blades in a space between the walls. He used a shop-vac to remove them without giving himself a hefty dose of tetanus–and then had to replace the hose of the shop-vac.

How many old razor blades are lurking in some dark space between your walls?

9 comments on “Where Old Razor Blades Go to… Die?”