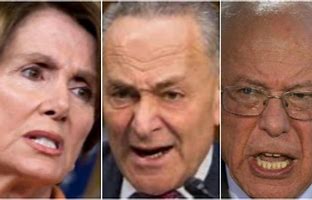 Democrats are fit to be tied, the witch-hunt having come up empty, the Mueller probe having utterly failed to find any evidence at all of “collusion” between Donald Trump’s campaign and “the Russians.” Wailing and gnashing of teeth.

But the Washington D.C. brain trust never runs out of ideas, and there’s already a new one sweeping up and down the aisles of Congress.

“We need a special prosecutor to investigate Trump’s non-collusion with the Russians!” This is a Democrat operative speaking, and our source is unimpeachable. “If he did not collude with the Russians, we can impeach him for that!”

Rep. Pookie Cholera (D-Mordor), vice-chair of the House Committee on Impeaching the &%$#&@ [lengthy list of expletives deleted], described the Mueller report as “a two-year cover-up, they planned to cheat us all along! We should have stuck to our motto: First punish, then investigate!”

I have lived in Metuchen, NJ, all my life. I have been married to my wife Patricia since 1977. I am a former newspaper editor and reporter. I was also the owner-operator of my own small business for several years. I wrote various novels and short stories published during 1980s and 1990s. I am a long-time student of judo and Japanese swordsmanship (kenjutsu). I also play chess, basketball, and military and sports simulations. END_OF_DOCUMENT_TOKEN_TO_BE_REPLACED
This entry was posted on Monday, March 25th, 2019 at 12:16 pm and tagged with Dems hate America, donald trump, liberals vs. America, Mueller probe, politics, Russian collusion and posted in news. You can follow any responses to this entry through the RSS 2.0 feed.
« ‘Feed the Kiddies Like Mrs. O Says, or Else’ (2016)
Coming Soon: Robot Authors? »