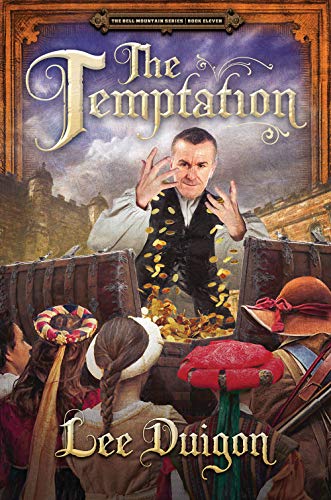 I received my author’s copies of The Temptation today, and I thought the occasion ought to be made more festive.

Yeah, I know the Bell Mountain Movie Contest kind of went belly-up, with only seven readers entering–although those seven did play with a lot of enthusiasm. But experience has shown that the comment contests always work.

Anyone can play, all you have to do is leave a comment anywhere on the blog, and whoever posts Comment No. 44,000 will win an autographed copy of The Temptation. We’ve had many comment contests over the years, and a lot of you have been winners. Don’t feel guilty about winning again! It’s a new book, after all; and if you already have it, you can keep the one I send you and make a present of your other copy. Or whatever.

The contest is open to all, and all comments are eligible except for the following: comments abusive to anyone else on the site; comments containing profanity or blasphemy (we don’t do that here!), ads thinly disguised as comments, like we’re too dumb to see through that, and comments simply too inane to bother with.

Let’s see how long it takes to rack up a little less than 2,000 more comments. It sounds like a lot, but you’ll be surprised how fast it goes.

I have lived in Metuchen, NJ, all my life. I have been married to my wife Patricia since 1977. I am a former newspaper editor and reporter. I was also the owner-operator of my own small business for several years. I wrote various novels and short stories published during 1980s and 1990s. I am a long-time student of judo and Japanese swordsmanship (kenjutsu). I also play chess, basketball, and military and sports simulations. END_OF_DOCUMENT_TOKEN_TO_BE_REPLACED
This entry was posted on Wednesday, April 17th, 2019 at 2:37 pm and tagged with a message to my readers, bell mountain series by lee duigon, comment contest, lee duigon blog, The Temptation and posted in Book Updates, Just for Fun, Uncategorized. You can follow any responses to this entry through the RSS 2.0 feed.
« Fap! My Brakes are Shot
Eccentric Cats »