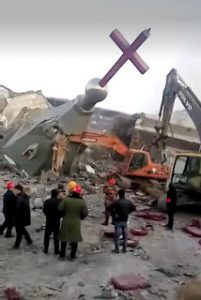 Who cares if they bulldoze churches, as long as their minds are right about “transgender”?

None of the international whoopee crowd seems to mind that Red China bulldozes churches and herds Muslim Uighurs into concentration camps; but Amnesty International is singin’ the blues about China and “transgender.”

Just because truth ought to be heard now and then, let us state that there is no such thing as “transgender people.” There are only seriously disturbed individuals who say they are “transgender”. China hasn’t rolled out the red carpet for them. That they can get “gender reassignment” in China under special circumstances tells us that even the Chicoms aren’t completely immune to this craze.

“One trans woman–” correction: that’s a man who thinks he is a woman, he suffers from a delusion–“nearly died after trying to remove her [sic> should be “his”] male genitals at home,” wails Amnesty. Uh, the fact that he, like, had male genitals is incontrovertible proof that he is not any kind of “woman,” but a man.

Oh, no! They’re turning to the black market for sex-change surgery!

Does anybody here see an eerie resemblance to the abortion movement in the west? All those grim tales of  back-alley abortions with coat hangers. And the next thing you know, it’s a billion-dollar industry with 60 million babies’ lives snuffed out. And now Democrats want to snuff them out even as they’re being born.

This is wicked foolishness, and for the sake of all humanity, for the sake of sanity itself, it must stop. Preposterous can be funny; but this stuff isn’t funny anymore.

We are not under any obligation whatsoever to “affirm” any kind of stupid crazy thing that anybody says about him or her self.

3 comments on “War Against Reality: the ‘Trans’ Movement in China”