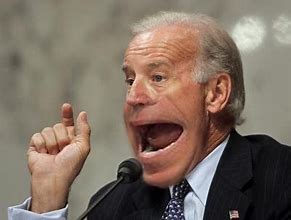 Why tell preposterous lies that no one but a total ignoramus would believe?

You know that roaring economy that has gone along with Donald Trump’s presidency, largely as the result of his actions? Well, t’other day goofy Joe Biden tweeted that that’s not the Trump economy–Trump’s just taking credit for the Obama-Biden economy.

Does he think we have amnesia? Like, we can’t remember Obama telling us that manufacturing jobs are never coming back, we’re stuck in the new stagnant normal–and snarkily demanding of Trump, “What’s he gonna do? Wave a magic wand?”

The flatlining of the economy during the eight miserable years of Obama-Biden has nothing to do, nothing at all, with the vibrant economy we’ve had so far with Donald Trump. When Obama and Biden were in office, did we ever hear them say, “Hang in there, it’s going to take our policies a little more time to work, but economic recovery is coming soon and it’ll be big”? Uh… no! Not until… now!

So what is the point of saying things which you know to be untrue–unless, of course, you suffer from delusions–and which your listeners know to be untrue? Are Democrats convinced that most people will believe them? Because they’re stupid? Because they pay no attention to current events? Because they can’t remember anything? Because they don’t have the sense that God gave a magazine rack? That these poor dopes so far outnumber ordinary intelligent, aware, sensible citizens that it’s a waste of time to talk to any audience but the dummies?

We mustn’t discount the possibility that as for many of our politicians, the truth just isn’t in them. I don’t believe Hillary Clinton, for just one of many examples, can tell the truth. About anything. On purpose. And meanwhile we have our colleges and looniversities teaching that there’s no such thing as the truth–only “your truth” and “my truth,” and whoever owns the keys to the jailhouse wins.

Some 2,400 years ago, Herodotus wrote that the Persians became a great nation because they taught their sons two things: to shoot the bow… and tell the truth.

I don’t believe anyone who’s not off his rocker will say the same for us.