Third Whopper (You Won’t Believe It) 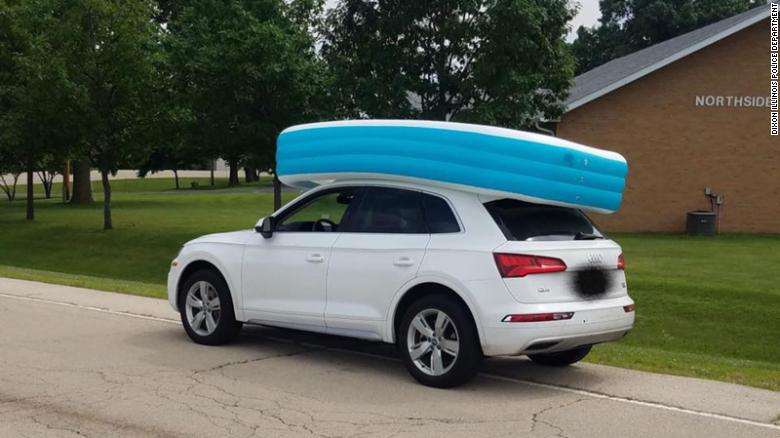 For those of you who’ve been following Oy, Rodney here on this blog on Sundays, you’re already family with weird stories involving wading pools. But this one’s from real life.

Police in Dixon, Illinois, arrested a 49-year-old woman–old enough to know better–for driving around with an inflated wading pool on the roof of her car… and her two daughters sitting in it “to keep it from flying away” (https://abcnews.go.com/US/mom-arrested-driving-inflatable-pool-car-kids-inside/story?id=64248083).

Not even Violet Crepuscular could have dreamed up foolishness like this.

The woman is charged with endangering the children. The J-school genius who wrote the story didn’t give the daughters’ ages. Not that there’s any age that’s good for sitting on the roof of a moving car.

She didn’t tie it down. Didn’t deflate it, fold it up, and safely stow it in the trunk. No. This potential Democrat presidential candidate just put the pool up there on the roof of her car and had her kids sit in it. Happily, before anything really bad could happen, someone saw this pageant of folly when he happened to look out the window, and called the police.

How much public money, do you suppose, was spent on this woman’s education? Where do we go to get a refund?

I have lived in Metuchen, NJ, all my life. I have been married to my wife Patricia since 1977. I am a former newspaper editor and reporter. I was also the owner-operator of my own small business for several years. I wrote various novels and short stories published during 1980s and 1990s. I am a long-time student of judo and Japanese swordsmanship (kenjutsu). I also play chess, basketball, and military and sports simulations. END_OF_DOCUMENT_TOKEN_TO_BE_REPLACED
This entry was posted on Saturday, July 13th, 2019 at 10:57 am and tagged with endangering a child, how to transport a wading pool, Oy Rodney, real-life stupidity, you won't believe it and posted in news, strange events. You can follow any responses to this entry through the RSS 2.0 feed.
« Second Whopper: Miley Cyrus Won’t Have Kids Till ‘Climate Change’ is ‘Resolved’
Byron the Quokka: Bell Mountain trivia question No. 5 »

6 responses to “Third Whopper (You Won’t Believe It)”