Psst! Byron the Quokka here, and let’s whisper, shall we, because we don’t want Lee to overhear us.

I’ve figured out how to wake this blog up, good and proper.

If anyone out there is bouncy enough to win both the comment contest and the Bell Mountain Trivia Contest–well, then, crikey, mate! You’ll win a ship! 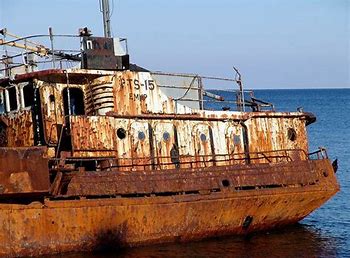 All right, I admit the Tar Princess needs a bit of tender loving care, she’s sort of a fixer-upper. But yea and forsooth–it’s a ship! And the Tar Princess, well, she’s just been sitting there for years, whoever owns her doesn’t want her anymore.

C’mon, now! How many blokes and sheilas on your block own a ship???

So let’s start commenting, let’s get into a Bell Mountain state of mind, whatever that is–and let’s get this blog here humming again!

I have lived in Metuchen, NJ, all my life. I have been married to my wife Patricia since 1977. I am a former newspaper editor and reporter. I was also the owner-operator of my own small business for several years. I wrote various novels and short stories published during 1980s and 1990s. I am a long-time student of judo and Japanese swordsmanship (kenjutsu). I also play chess, basketball, and military and sports simulations. END_OF_DOCUMENT_TOKEN_TO_BE_REPLACED
This entry was posted on Friday, July 26th, 2019 at 8:04 am and tagged with a message to my readers, Bell Mountain trivia contest, Byron the Quokka, comment contest, lee duigon blog, reader response and posted in bell mountain series, Just for Fun. You can follow any responses to this entry through the RSS 2.0 feed.
« ‘Bono: Give ISIS Comedy’ (2016)
Dem: Spend $10 *Trillion* on ‘Climate Change’ »