Byron: ‘Where Is Everybody?’ 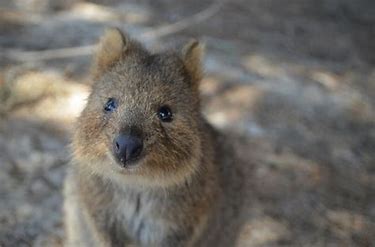 Oi! Where is everybody this morning?

Byron the Quokka here, mates–and I just stopped by to give you a friendly reminder, which is this.

The current ongoing comment contest is heading towards 50,000 comments on this blog, a major dinkum milestone, and there’ll be a special prize for the winner. We won’t tell you what the prize is until we’ve reached 49,000 comments–because we want to see the fur fly, once readers realize what a fantastic prize this is. We’re just a few hundred comments away from that.

Now I’m supposed to be running this thing, and it makes me look bad when there’s only one comment up so far today. A duck-billed platypus could do better than that!

I have lived in Metuchen, NJ, all my life. I have been married to my wife Patricia since 1977. I am a former newspaper editor and reporter. I was also the owner-operator of my own small business for several years. I wrote various novels and short stories published during 1980s and 1990s. I am a long-time student of judo and Japanese swordsmanship (kenjutsu). I also play chess, basketball, and military and sports simulations. END_OF_DOCUMENT_TOKEN_TO_BE_REPLACED
This entry was posted on Wednesday, September 11th, 2019 at 8:15 am and tagged with a message to my readers, Byron the Quokka, comment contest, lee duigon blog and posted in Just for Fun. You can follow any responses to this entry through the RSS 2.0 feed.
« ‘UK School Threatens to Brand 8-Year-Olds as Racists’ (2013)
Who’s Ambushing French Fire-Fighters? »