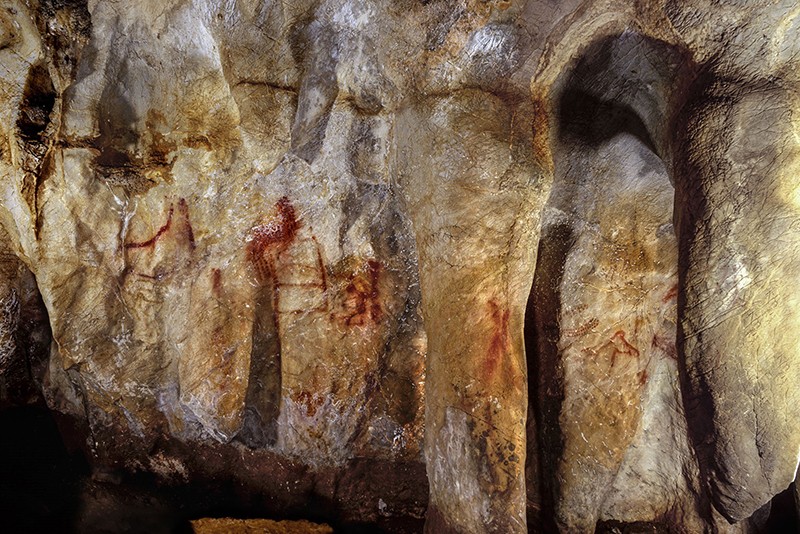 It doesn’t look like much–but ask any museum curator what kind of shape any painting would be in, after being neglected for 65,000 years.

Young Earth creationists, please stay with me. The point here is not how old the paintings are, but that they exist at all. For the sake of argument, we provisionally accept the dating of the art, which was accomplished by dating calcium carbonate deposits that formed on top of the images. And the age they came up with was some 65,000 years before the present.

According to the same scientific establishment, modern humans–Homo sapiens, like us– didn’t arrive in Europe until circa 40,000 years ago. The only people there, back then, were Neanderthals. The artists must have been Neanderthals. They painted abstract symbols whose meaning is long since lost, along with stenciled hand prints and a few damaged, but still recognizable, pictures of animals. In the photo above, you can just make out a horse’s head off to the right.

It shouldn’t be too surprising that Neanderthals were able to create art. Their skeletons were sturdier than ours, their heads shaped differently from ours–and their brains were slightly larger than ours. Why shouldn’t they have been capable of creative thought?

Well, because the Settled Science of the past hundred years said they couldn’t. In plain English, the term “Settled Science” translates as “Shut up!”

In real science, the jury’s always out. Whenever it tries to come in with certainties, it turns out to be wrong.

Well, something’s wrong here. Either Neanderthals were not some kind of para-human evolutionary dead end, or Homo sapiens was in Europe way earlier than the established timeline allows.

But it’s an exciting discovery, isn’t it? Maybe the perceived differences between us and Neanderthals are only superficial. Maybe the reason that there aren’t any more of them is only because they were absorbed into the general human population–in which sense they are still here, as part of our own ancestry.

God didn’t create two Adams, but only one–from whom we are all descended.

I have lived in Metuchen, NJ, all my life. I have been married to my wife Patricia since 1977. I am a former newspaper editor and reporter. I was also the owner-operator of my own small business for several years. I wrote various novels and short stories published during 1980s and 1990s. I am a long-time student of judo and Japanese swordsmanship (kenjutsu). I also play chess, basketball, and military and sports simulations. END_OF_DOCUMENT_TOKEN_TO_BE_REPLACED
This entry was posted on Tuesday, January 28th, 2020 at 1:45 pm and tagged with Adam as ancestor of all humans, Neanderthal cave paintings, Neanderthals in Spain, settled science, unexpected discoveries, unity of the human race, unsettled science, were Neanderthals human? and posted in science news. You can follow any responses to this entry through the RSS 2.0 feed.
« The Best Reporters
Zany Cats & Dogs »