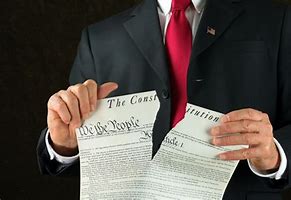 First you rip up the State of the Union Speech, and then the Constitution

Can the states get together and chop a piece off the Constitution?

Democrats have made a lot of noise lately about abolishing the Electoral College, which protects 47 states from being dictated to by New York, California, and Illinois. Because there’s no longer any meaningful instruction in civics anywhere, most people don’t understand what the Electoral College is, how it works, and why we need it. That makes them easy prey to pious babblings about “making the country more democratic.”

So a bunch of blue states, Democrat states, have this thing going, the National Popular Vote Interstate Compact: by which, if they get enough states signed up, they can completely overturn the purpose of the Electoral College by providing for all the electoral votes of any state to go to the candidate that wins the popular vote, nationally–no matter how the people in that state may have voted. This is an end run around the Constitution.

For the sake of simplicity, what does the Constitution actually say? Do you need to go to law school for 17 years before you can begin to understand it? Let’s just see what it says (https://www.thoughtco.com/constitution-article-i-section-10-3322336).

Article 1, Section 10–we are interested primarily in the third clause, which says:

“No state shall, without the consent of Congress… enter into any agreement or compact with another state, or with a foreign power…”

I don’t think that’s so hard to understand. Do you? Like, the whole section is merely saying that states aren’t allowed to act like independent countries.

An immense amount of pettifogging lawyer lingo has sprung up around these clear and simple words, so that now no one is sure whether or not the states can drastically alter the Constitution without going through the amendment process. Our founders purposely made the amendment process long and difficult, so that foolish things should not be done in the heat of the moment–historically, a fatal failing of “democracy.”

But because our education system is a bad joke played on us, every day, by radicals, most people know very little, if any, of our country’s history, virtually nothing of her founding documents, and have little or no appreciation of what those things are that make the United States uniquely great among all the other countries in the world.

Trust me on this: you absolutely don’t want to trade our Constitution for the United Kingdom’s. Or anybody else’s. The United States grew great because it was different! And one of the most important factors in that difference was our Constitution. As written! As duly amended! And certainly not as “re-imagined” by slippery, conniving liberals and their sleazy lawyers.

Besides which, you’d think just about anyone would be smart enough, when he hears liberals recommend we do something, to realize that doing the very opposite is always best.

7 comments on “Can They Really Sidestep the Constitution?”