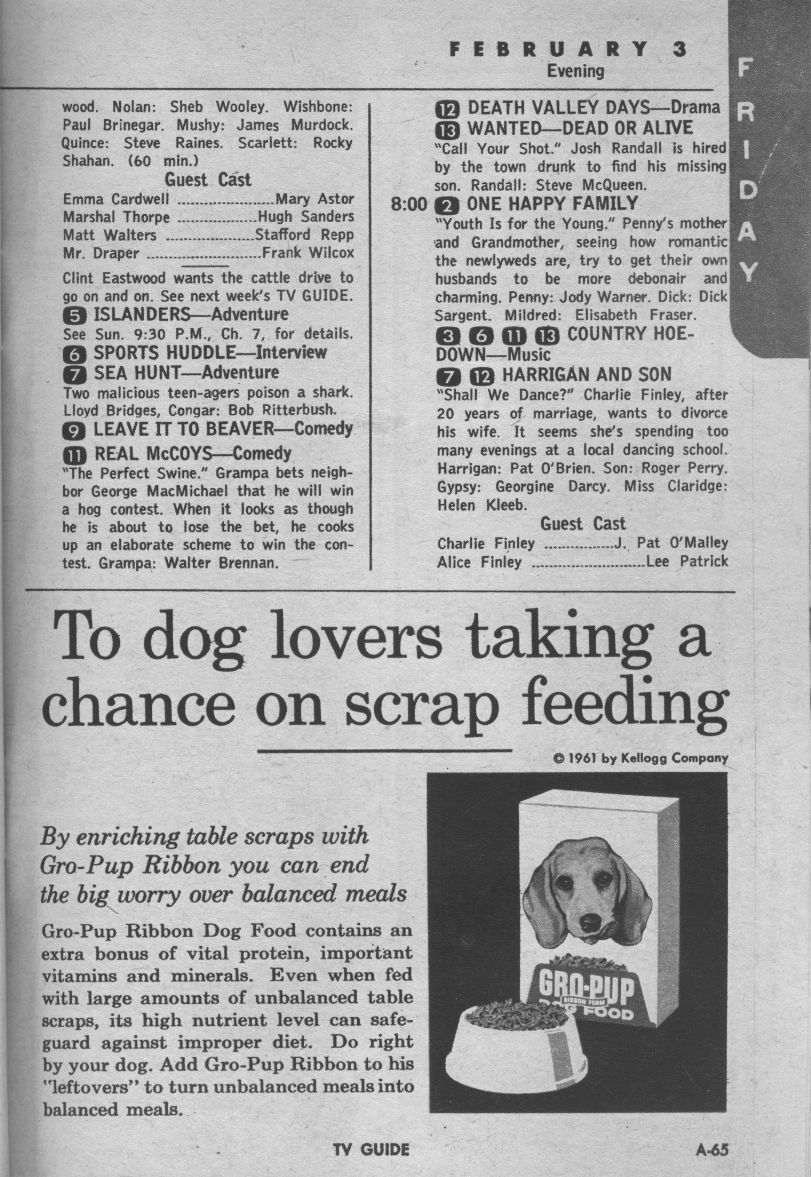 Tally-ho, and away we go! Byron the Quokka here, with this week’s Quokka University TV listings. We show the stuff that none of the networks dared to show, back when. But we have to admit we don’t have sponsors like Gro-Pup. We do have Go-Gro Crayfish Food, but their advertising budget won’t grow anything bigger than a crayfish.

Anyway, here are a few samples of fantastically wonderful TV for your weekend. Just don’t tell anybody where you got it.

You’ll never again have to ask, “Does this dress make me look fat?” Because you’ll have a Hollywood Girdle on under it! Hosts: Boris Karloff, Ayn Rand. With Gene Woodling’s Xylophone Orchestra.

Howard Cosell interviews athletes who play sports you never heard of–Papuan egg-swallowing, speed crocheting from Estonia, 43-man Squamish, wheel barrow-throwing from the most isolated regions of Spain, and many others. Nominated for a Broken Coccyx Award!

Sheriff Grendel (Alan Alda) recovers from having a load of bricks dumped on his head, but has now become a serial killer out for revenge–against whom, he doesn’t know. It’s up to shy schoolmarm Pam Spam (Joan Rivers) and plucky Deputy Horace Dawg (an animated root vegetable) to stop him. Toby: Steve Reeves  Mayor Motormouth: Nick Cravat

Anchor David Pong reports from underwater at Weeki Wachee while the famous Mermaids cavort all around him. Be sure to send away for the Bubble-Meister, or you won’t be able to understand a word David says–remember, he’s sitting underwater and it makes him sound funny.

Well, that ought to be enough to get you started! And please let us know if you actually get a Bubble-Meister after you send away for one.