Sometimes when I look up from work, I notice things in my own neighborhood that I never saw before.

At the neighborhood school, practically next door to me, the American flag hangs from the pole in tatters. The wind has torn it into several flapping pieces. The school never lowers the flag, leaves it out night and day, in all sorts of weather.

When I went to elementary school, the flag was lowered at the end of each school day, folded correctly according to flag etiquette (usually by Boy Scouts), and stored in a special locker until it was run up the pole the next day–unless there was foul weather.

Am I surprised that a public school today would show such flagrant disrespect to America’s flag?

Absolutely not one freakin’ bit! 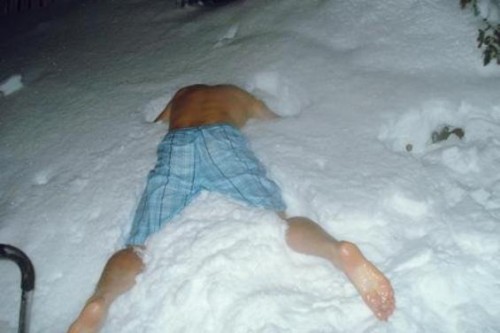 It’s winter. Compared to last winter, this one’s rather tame and chicken-hearted.
But it’s still winter, and around here, temperatures at mid-day only get into the low 40s.

So what’s with all these people walking around in shorts and T-shirts?

It’s not everybody, but you see at least a couple of them on every block in town. Is it a reality TV thing? Where does it come from? I mean, there’s a pretty stiff north wind blowing all the time, and it’s not very comfortable. Why are all these characters dressed like it’s mid-May or early June? It’s February!

What is the origin of this foolishness? Are these “People of Walmart” wannabes? Does some “star” do this on a music video?

Some of these folks are going to get good and sick before this winter’s over. One of my chess buddies put me on to The Gammage Cup by Carol Kendall. Written in 1959, this fantasy adventure for young readers–a Newbery Award-winner, by the way–is completely devoid of sex, blood-drinking, profanity, and the rest of the current staples of young readers’ fiction. Instead, it just has to plod along with adventure, humor, engaging characters, an amazingly tantalizing historical background, and nice, clear prose.  There isn’t even any sorcery or witchcraft in it.

Kids will like it because it’s easy to read without being dumbed-down, and it’s highly imaginative. Adults will enjoy it for exactly the same reasons. It’s probably perfect for reading aloud to your home-schooled 10-year-old.

This is not an overtly “Christian” book. If it has a message, it’s a plea to resist the pressures of conformity. But it’s not hard to imagine God using this book to do good–which is a great deal more than you can say about a lot of the current young readers’ fiction.

Anglicans in Canada must have been jealous of Presbyterians in the USA prancing around in animal costumes and calling it a worship service. They pondered and pondered, and finally up with something worse.

The other night at St. George’s Anglican Church in St. Catherines, Ontario, a band of giggling pagan priestesses staged The Vagina Monologues (admission, $20): and they performed it at the altar.

For those unfamiliar with it, The Vagina Monologues has been floating around since 1996, to the delight of freaks and feminists throughout the Western world. I admit that I have never seen the show, nor do I plan to see it, ever. But there are many descriptions of it on the Internet, and they all tally.

END_OF_DOCUMENT_TOKEN_TO_BE_REPLACED Tomorrow at 7 p.m., at St. George’s Anglican Church in St. Catherines, Ontario, a group of feminist “priests” will perform The Vagina Monologues from the altar of the church.

I’ll have more to say about this in my column for News With Views this week. For the time being, let Christians pray for the reclamation of this church–before it becomes like the chaff which the wind driveth away.

If you don’t know anything about The Vagina Monologues, look it up on the Internet. You’ll be appalled by what these silly women propose to present from the altar.  I think I would put this on a par with Belshazzar and his concubines drinking out of the vessels from the Lord’s Temple in Jerusalem.

A friend of mine was substitute-teaching one day, about ten years ago, when he happened to mention the Ten Commandments. Instantly a chorus of children’s voices rose in protest–“Ooh! That’s religion!” You would’ve thought he’d been caught exposing himself.

Where, and from whom, had those children learned such an averse reaction to “religion”? You have three guesses, and I’ll give you a hint–right there in the classroom, from their so-called “teachers.”

The other night, a friend and I were chatting in a chat room on a popular Internet game site. Our subject was theology, and the spiritual condition of our country. Although neither of us mentioned any particular sins, or any particular group of sinners, someone immediately butted in with “Judge not! You’re never supposed to judge! I’m sick of you people always judging me!” She went on to say how offensive it was to have anyone talking about “religion” (there’s that word again), and we should just shut up about it. How dare we discuss such a tasteless subject in public? She added that she herself was a Christian–the kind of Christian who recoils in horror from the name of Christ.

That’s the state of our popular culture today. People have not forgotten God. They close their eyes and ears and hearts to Him, and have fits if anybody dares to speak of Him.

Nice going, families. Just keep on sending your kids to public schools, and see what happens to their faith.

Tomorrow I will join dozens of other Americans in not watching the Super Bowl.

Oh, no! I’ll miss Madonna’s halftime show! Thanks, but I’d rather watch ants crawling in and out of the ant-hill. The Stupid Bowl halftime show is always some boring entertainer that you’ve already seen hundreds of times, whether you wanted to or not. The real trick is avoiding Madonna altogether.

But you’ll miss the six hours’ worth of pre-game coverage! Eh? What can they find to talk about for six hours?

I have banished TV from my home, but I still have to listen to an infinite number of radio ads with Stupid Bowl themes. These are almost indescribably offensive. In most of them, adult males are portrayed as the equivalent of poorly brought-up four-year-olds, who would be almost certain to defecate on the sofa if their long-suffering wives didn’t nag them constantly. And on Stupid Bowl Sunday, the talking heads who nag you all year about healthy eating turn around and exhort you to sit on the couch for 16 hours gobbling snacks and fast food.

Somewhere along the way, they supposedly get around to actually playing a football game–not that you’d notice.

Alas! Is it come to this? Are we Americans become so tame, so lame, so empty-headed, that we can be led around by the nose, and brought to invest so much time, so much passion, so much money in a freakin’ football game? I suppose 150 years of public schooling, with its emphasis on mindless conformity, has truly done its work. If we’re told to do it often enough, by enough voices in the media, who knows what we might not do? How else do you think a community-organizing mystery man, with no more biography than a robot or a lizard-man, gets elected president?

No, no, no! You shall not tell me what I’m passionate about! I refuse to waste my passion on a stupid football game! (But isn’t that kind of what you’re doing now, old sport?) All right, all right–I have gotten cranked up about it. Maybe football brings out the worst in me.

Yesterday it was raining cats and dogs (as usual–and I don’t even live in Seattle), and as I was going out the front door, my foot slipped on the wet doorstep, my ankle buckled, and I was launched into a swan-dive to the cement sidewalk.

It could’ve been very nasty, but I escaped with a scraped knee and nothing else. Obviously God was watching over me. But I must also thank my judo instructors of long ago, who drilled us incessantly in the art of taking a fall. After all, if you can’t fall without getting hurt, you really can’t practice judo. Even after all this time, I have retained this skill. I might’ve wound up like Humpty-Dumpty, otherwise. Certainly I would recommend this training to everyone!

Meanwhile, I’m still waiting for the signal to start writing Book #6 of my Bell Mountain Series. Our artist, Kirk Douponce, says he’s ready to start work on the cover of #4, The Last Banquet, and I’m in the process of proofreading it. Hopefully it’ll be ready for publication by the end of this summer; and then we can all get to work on #5, The Fugitive Prince… provided I continue to survive any additional falls I might take.