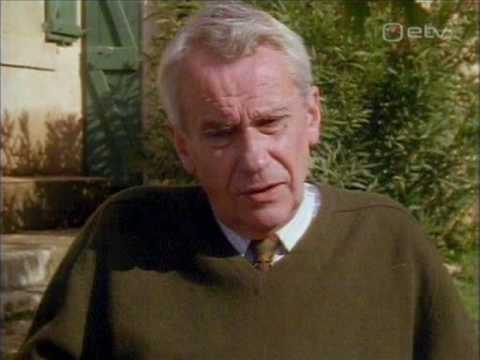 Christopher Tolkien, now 87, has made it his life’s work to bring to light the immense body of unpublished work left by his father, J.R.R. Tolkien. Although Tolkien was most famous for The Hobbit and The Lord of the Rings, those were only the tip of the iceberg. He left behind some 70 box-loads of unpublished work–all of it having to do with his fantasy world of Middle Earth! Thousands and thousands and thousands of pages of it.

In a recent (and rare) interview with the famous French newspaper, Le Monde, Christopher Tolkien voiced dismay over what our popular culture has done to his father’s work. He thinks they’ve dumbed it down (gee, ya think?) and tried to turn it into a money machine. He finds Peter Jackson’s Lord of the Rings movies particularly obnoxious and is not looking forward to the newest installment, The Hobbit.

I haven’t seen the movies because I don’t want any of my money to wind up in Ian McKellan‘s pocket. The actor who plays Gandalf is a homosexual who brags about defacing Bibles. So there’s not much I can say about the movies. But I can say that Tolkien’s books, as written, especially Lord of the Rings, strike a note of stateliness. It inclines the reader to take them seriously.

What vexes Christopher Tolkien is the way the movies changed public perception of his father’s work, and spun off into video games, cartoons, imitators, figurines, amusement park rides… Dreck is not stately.

Well, Chris, what do you think your father’s dear friend, C.S. Lewis, would say if he were alive today and saw the mess the movie mob made of his Narnia tale, The Voyage of the Dawn Treader? I think one or more persons would get punched right in the nose. That bit in which Lucie, a pre-teen little girl, kung-fus a bunch of grown-up male villains who attack the heroes, just whups the tar out of them… barf-bag, please.

If you’re as tired as I am of superheroes and movies made of comic-books, read the books as the authors wrote them.

Hang in there, Christopher. Believe it or not, there are still some of us who like your father’s books just the way he wrote them.