One of my very earliest memories is “helping” my father and Grandpa clear away the ruins of an old outhouse in the back yard blown over by a hurricane. Because I was so small, when I was four years old, it looked positively huge to me. And I had no idea what it was used for–they had indoor plumbing by then.

I remember them going at it with saws and claw hammers, and carting the wood out to the curb for trash pickup. It was just the kind of bright and sunny day you get after a major storm. Grandpa had a double lot, half of it for the house, the rest planted all over with flowers, berry patches, and vegetables. And yes, Grandma knew how to can the produce–pots full of black and red raspberries, Concord grapes, and whatnot. People in those days knew how to do a lot of things that have since been forgotten.

The old house is gone now, everything’s gone, even the beautiful dogwood trees. I’m so glad I can still remember it.

Because I think Heaven will be very much like it. 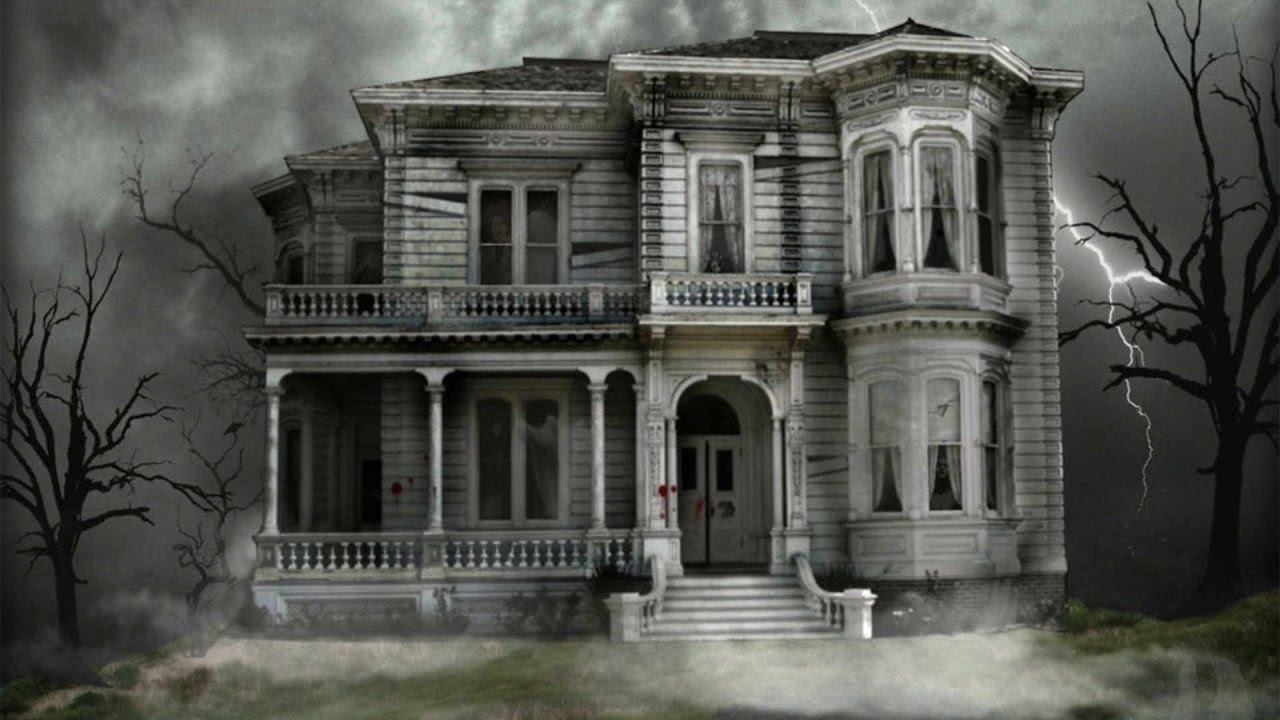 I don’t think we have any more haunted houses in this town. What a loss! But around here a building needs to be deserted only for a few hours before they tear it down and put up a nail salon… or some real big house with no yard space and nobody ever home.

Memory Lane: The ‘I Dare You’ House

O, this glorious old ruin! Chock-full o’ haints, of course. All old houses are. Kids know that; most adults don’t.

So much unasked-for change around here… makes me feel like I’m a ghost, sometimes.

Wow! Warner Bros.’ “adult Westerns”–what a splash they made when they came out in the 1950s. Do you remember any of them? (They all had cool theme songs.)

The one I remember best was Cheyenne, starring Clint Walker, maybe because it had such a long run (1955-62, with over 100 episodes). Cheyenne Bodie wandered around the Old West, looking for adventures. He found one every week. And he was always on the side of truth and justice. That’s how old this is.

Ah! Maverick. Sugarfoot. Rawhide. Lawman. Bronco. Laramie. And of course Wagon Train. Those were shows that you could sink your teeth into. If you didn’t like Westerns, I’m afraid you were rather stuck. But it wasn’t all shoot-outs and cattle-rustling. The best scripts transcended the genre.

One of my favorite activities, as a boy, was to go out into the woods next door and turn over rocks and logs, looking for salamanders. There were a lot of them around, but it was always a big event when I found a red salamander–Pseudotriton ruber ruber, to the salamander cognoscenti.

The young ones are a brilliant orange-red with black spots; as they age, they grow darker. They aren’t very common, so it’s always worth a “Yahoo!” when you find one. They eat bugs, like the globalists say we should. But I could never get any of mine to eat, so I always had to let them go.

These are gorgeous little animals, they don’t bite, they were twice as big as any other kind of salamander I could find, and it’s a pleasure just to see one. I’ve never found one anywhere in this neighborhood. But there was a little swamp behind the Studnickis’ house (great for ice-skating in the winter) and they seemed to like the damp environment.

My parents never understood why I wanted to bring these home,. but they didn’tc complain about it.

If you were born after, say, 1990, it might strike you as very strange that once upon a time in America, every male, with only a few exceptions, had to serve in the army whether he wanted to or not. But it’s true. When I was a boy, every male over 18 had to register for the draft and pretty much everybody got sucked up. (Well, God told us through Samuel what a king would do to us, didn’t he? Too bad we didn’t listen.)

And so The Phil Silvers Show, also known as simply Sgt. Bilko, struck a universal chord back then that it doesn’t strike anymore… because we have no draft, thank God.

Sgt. Bilko (Silvers) was a smooth con man working in the motor pool and being a thorn in the side to his commanding officer, Col. Hall. Paul Ford was just great as the hapless colonel, perpetually bamboozled by the slippery sergeant.

This was an awfully funny show, although a military draft is not funny at all. God did warn us about increasing the size and power of the state (I Samuel Chapter 8)–but no, the people had to have a king like everybody else! The show ran from 1955 through 1959 and was very popular. Gee, I can hardly believe I was only 10 years old when Sgt. Bilko went off the air.

It’s seven years since I first posted this. Yes, I still have all those dinosaurs! Only now I don’t care how much money I could get for them. They ain’t goin’ nowhere!

Your Old Toys Are Worth Big Bucks

Most of my family has passed on; very few of us left. Little gifts that grandparents, aunts and uncles, and my mother and father gave me… well, sorry, but you just can’t put a price on that.

Handling my now-expensive Sphenacodon, I can almost reach back and touch the summer of 1960.

Something stirred one of my very earliest memories.

My parents went away for a weekend and took me with them. I was either four or five years old. My brother was still a baby, so let’s say four.

We went to what I guess now was a rented house somewhere in North Jersey or upstate New York, in farming country. I don’t know what my parents did all day; but there was a stone wall in the back yard and I sat on it, playing with my toy horsies and making up adventures for them…

And explaining it all to the cows!

See, I wasn’t lonely because on the other side of the wall was a pasture and I had company the whole time I was there–three cows who hung out with me. I petted them. I told them all about my toys. I told them little stories I made up (my father, my grammie, and my aunts told me stories all the time, and I imitated them). They were the nicest cows you could imagine–although I don’t know, maybe most cows are like that. Suburban kids don’t get a lot of experience with cows.

But that little bit of experience I had, I treasure.

I hope I meet those cows again someday. We have a lot of catching up to do. 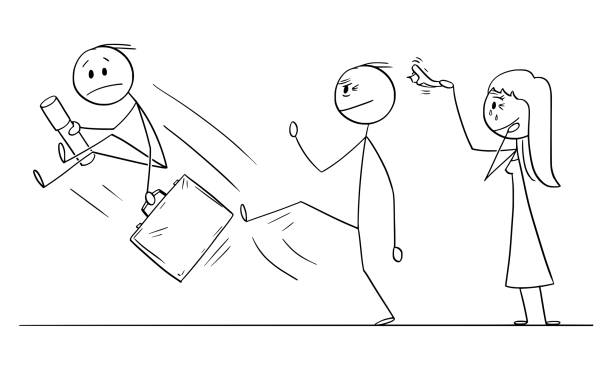 I don’t know what reminded me of this experience, but I thought it worthwhile to share with you. Maybe it’s the “back to school” season.

I’m in third grade, recess is over, and we’re lining up to go back indoors. I’m standing in line, minding my own business, when the little punk behind me raises his hand and proclaims, “Mrs. C, Duigon just called you a big ape!”

I said no such thing, of course–in fact, I rather liked our teacher; but she sent me off to the office and the principal sent  me home, suspended from school for the day, blot on my record–all attempts to defend myself were in vain. I was sure my parents would punish me severely; but to my amazement, for once they believed me rather than The Authorities.

This left me with a deep distrust of The Authorities which I have yet to be able to shed. I mean, all it took was one unsubstantiated lie and I was guilty! Believe me, I know how Bret Kavanaugh felt when he had a lot of lying garbage thrown at him. My school officials made no effort to get at the truth: a mere accusation was enough to get me suspended.

I was no angel as a boy; but getting suspended for something you didn’t do… well, it’s not something that’s easy to forget. 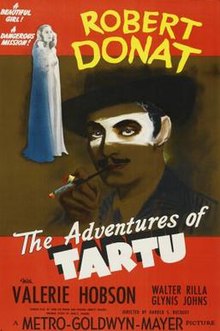 When I was a boy, I loved to read the TV listings in the newspaper. I especially enjoyed the late-night offerings, which I wasn’t allowed to see. Example: 1 a.m., Channel 5, Scudda-Hee, Scudda Hay! It was something to do with mules.

But even more tantalizing, and listed at least once a month, always for very late at night, was a film called The Adventures of Tartu. Wow! Who was Tartu? Or what was Tartu? I loved speculating about it. The setting seemed to be Rumania–what kind of movie is set in Rumania? How close is that to Transylvania? Was Tartu a vampire-slayer?

Enter the Internet, years and decades later. Now I know!

This was so much more fun as a complete unknown! Looking it up and finding out the whole plot–well, that just ruined everything, didn’t it? The movie couldn’t possibly have lived up to my imaginings.

It’s a lesson in life that one learns again and again: sometimes anticipation is best just left alone. Fulfilling it only depletes it. 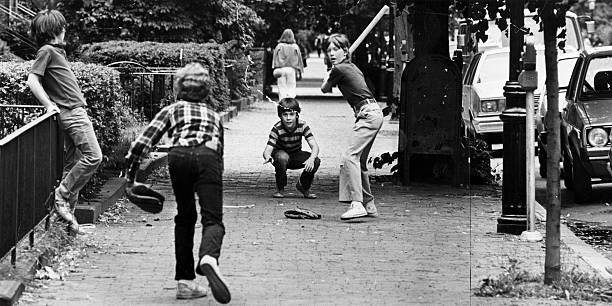 I grew up in a time when most kids played what they wanted to play and didn’t require full-time adult supervision–to say nothing of scoreboards, uniforms, sponsors, etc., etc.

Baseball Without the Little League

I think one of the wisest things my parents ever did was not to let me join the Little League. They said I’d hate it: the coach’s favorites play while everybody else just sits on the bench.

So much nicer to play with patchwork rules (hit the ball past the swing set, it’s a home run) and only four or five kids on a team. You get up to bat 50 or 100 times instead of not at all, you play as many innings as you please, and you don’t have to waste time undermining your teammates.

But then who sees free-range kids playing outside anymore?