And Here’s Our Winner!

G’day, boys ‘n’ girls, and stand up and cheer the winner of our Second Annual Christmas Carol Contest!

Our winner is…. Lydia! She posted this rendition of Joy to the World on Dec. 9, and that day it got 44 views. We still don’t know the name of the children’s choir that’s singing it, but whoever they are, it’s lovely.

Lydia, you have won an autographed copy of Bell Mountain No 12, His Mercy Endureth Forever. It hasn’t been published yet, but it will be soon.

All of us together raised a joyful noise unto the Lord, this Christmas season. And if there are still some Christmas hymns you’d like to hear, all you’ve gotta do is ask for them.

This is Byron the Quokka looking forward to the next contest… 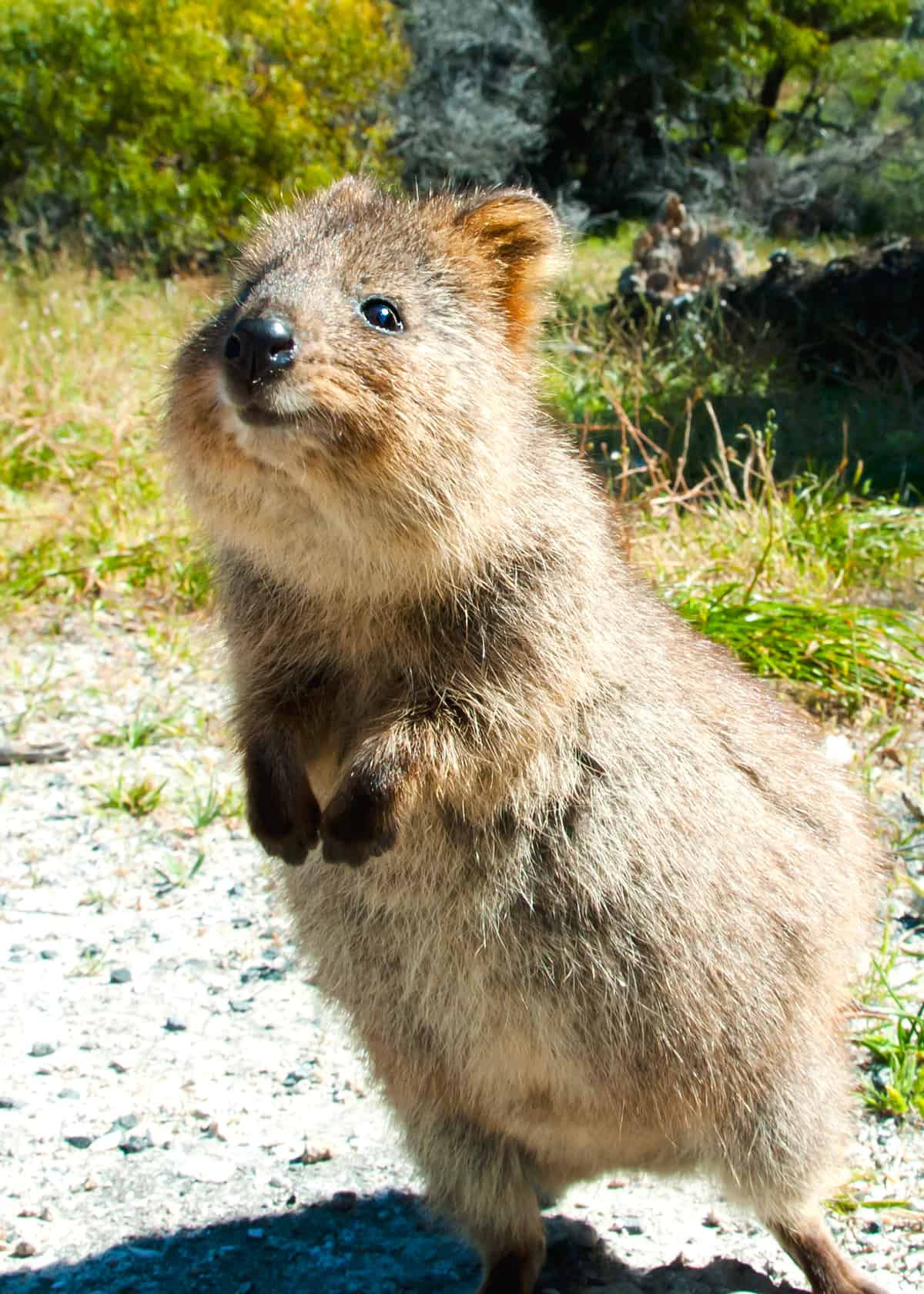 (Sorry, didn’t mean for the picture to turn out anywhere near that big!) G’day, everybody! Byron the Quokka here, with the last of some special pound cake my aunts had for Christmas–and some news.

Tomorrow’s the day we announce the winner of our Second Annual Christmas Carol Contest. We quokkas already know who it’s gonna be, but I’ll be in big trouble if we let it slip.

The winner will get an autographed copy of Bell Mountain No. 12, His Mercy Endureth Forever, which should be published sometime very soon, everything is ready.

Now, does this mean we won’t post any more Christmas carols until next Christmas? Perish the thought! We are committed (I heard that in a commercial once, and it sounded great!) to posting the hymns that you, the readers, wish to hear. If you ask for In the Bleak Midwinter in July, we’re only too happy to post it for you.

Tune in tomorrow for the awesome climax to our contest! 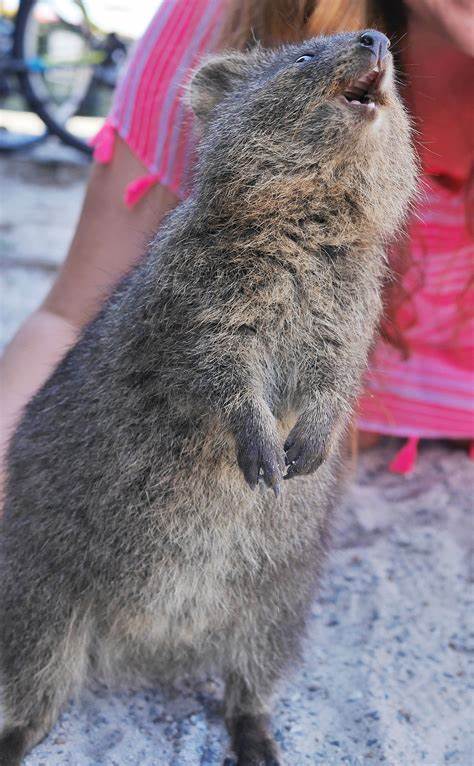 G’day, everybody! Byron the Quokka here; and that’s me up there, singing, but I can’t tell you what carol I’m singing because that might skew the contest. (Note the bicycle in the background! I keep telling him, offer a bike as the prize, if you want people to play. But does he listen?)

Well, Monday we’re wrapping it up, our Second Annual Christmas Carol Contest. And the carol that got 44 views on Dec. 9 is still way out front in the lead. No, I can’t tell you what it was, or who posted it. Everybody here on Rottnest Island knows, but we’re not talking.

Things are mighty quiet around this blog today. I guess a lot of you are tuckered out from New Year’s. My family spent New Year’s Eve wearing party hats, blowing on noise-makers, and playing Clue. Poor Uncle Pottsy. He was Professor Plum and wound up having to accuse himself–and it turned out to be wrong. He felt like such a doo-dah.

Well, look, I’m supposed to get you folks excited about this contest, and can I help it if there’s only so much excitement to go around? Can’t be excited all the time!

The winner will be announced on Monday. Be there, or be square!

Happy New Year, everybody! Byron the Quokka here, with Series VI of Acme False Facts. Aunt Feezy gave me a set for Christmas–I’m afraid she thought the facts were real: us quokkas are trusting souls–and I can hardly wait to impress all the other quokkas with my new-found bogus knowledge!

Without further ado, here are my favorite False Facts, so far.

*Benjamin Franklin invented the cell phone in 1771, but lost interest in it when there was no one to call.

*In 1951 President Mickey Vernon attempted to appoint his horse, Shorty, to the United States Supreme Court. This led to the discovery that he wasn’t really the president, but the Senate confirmed the appointment anyway.

*Kansas City was originally in Japan, but relocated in 1869.

*Ancient astronauts discovered Play-Doh on Mars and brought it to earth in 502 B.C.

*A centipede named Nobody’s Fool won the Kentucky Derby in 1963, but his victory was disallowed because he used too many legs.

I could do this all day, but I won’t–I’ve got a Christmas carol contest to administer.

Remember! Stand up straight, shoulders back, look ’em in the eye, and speak with unshakeable confidence! And you’ll have a future in politics.

In case you hadn’t noticed, our Second Annual Christmas Carol Contest is still running, and will run till Jan. 6, next Monday. So if you haven’t entered a carol yet–well, why not?

So we have this hymn request from SlimJim, Hark! The Herald Angels Sing. I hope you like this performance by Amy Grant. 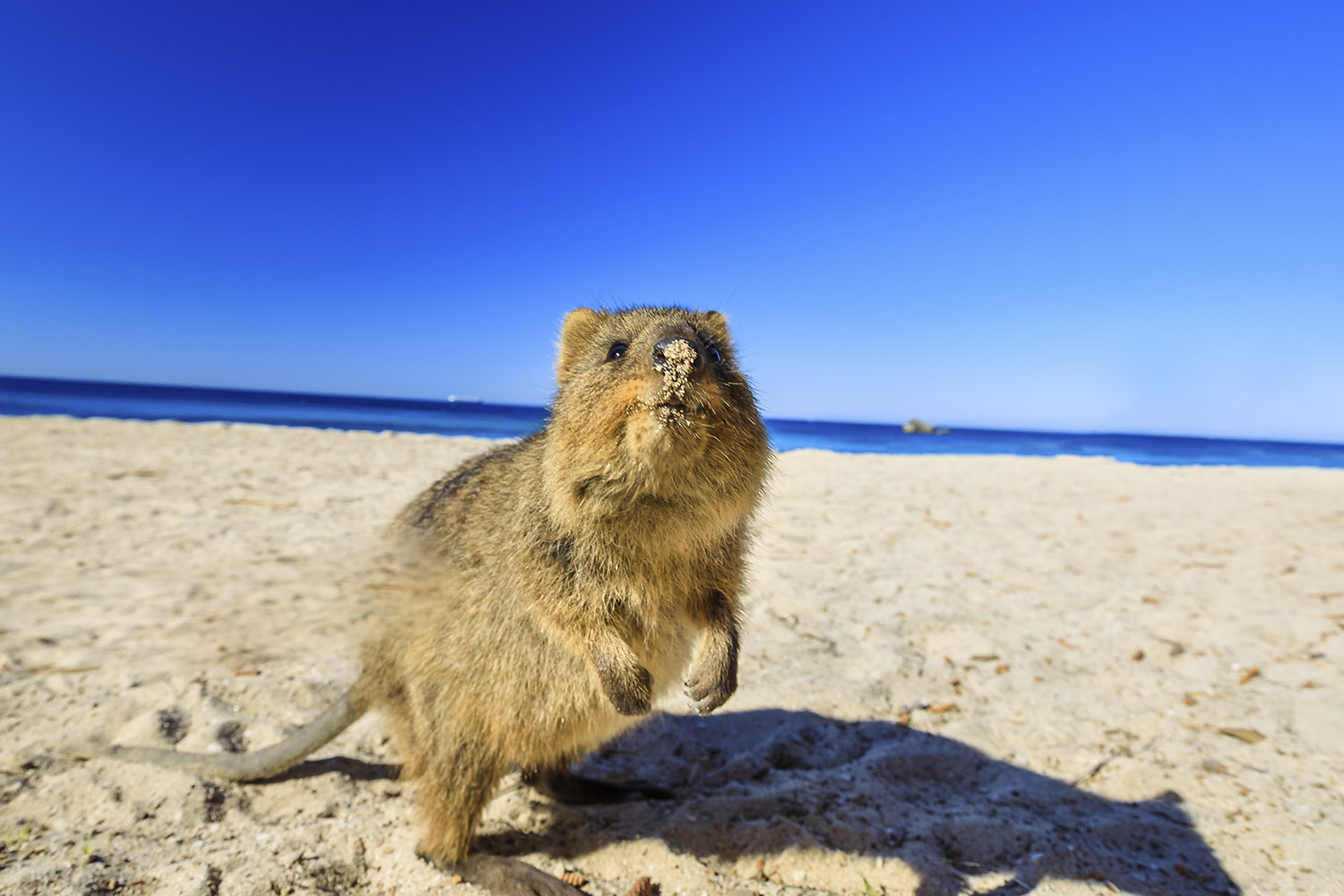 G’day! Byron the Quokka here, at the beach, and I’ve just heard good news! We’re taking our cue from TheWhiteRabbit (he ought to be made an Honorary Quokka), and extending the contest for the full 12 days of Christmas, wrapping up on Monday, Jan. 6–Epiphany. So let’s keep those Christmas carols coming!

Y’know something? Some of you have been here for years and years, and have never yet requested a hymn. That’s bashful! Only a few readers have entered carols into our Second Annual Christmas Carol Contest.

Well, don’t be shy–we’re all friends here. You’ve got till the Monday after next.

The winner is whoever’s carol gets the most views on the day it was posted. So far the leading carol has 44 views. The prize is an autographed copy of His Mercy Endureth Forever, when it’s published sometime early next year.

I’m supposed to be administrating this contest, so don’t make me look like a doo-dah!

Held Over! Our Christmas Carol Contest

G’day after Christmas! Byron the Quokka here–and are you ready to close our Second Annual Christmas Carol Contest? Well, I’m not!

Crikey, look at all the carols that we haven’t posted yet! The carol with 44 views the day it was posted, Dec. 12 (I think), is still in the lead. I don’t think anyone’s going to beat that, but we can keep on playing. The winner gets an autographed copy of Bell Mountain No. 12, His Mercy Endureth Forever, when it’s published–which should be pretty soon.

Sorry, I’m not allowed to tell you who got those 44 views: don’t want to spoil the surprise. Meanwhile, no way we’re gonna run out of carols! You request ’em, I’ll post ’em.

And a Merry Christmas to us all, and as Tiny Tim observed, God bless us, every one!

The Carol Contest Isn’t Over Yet! 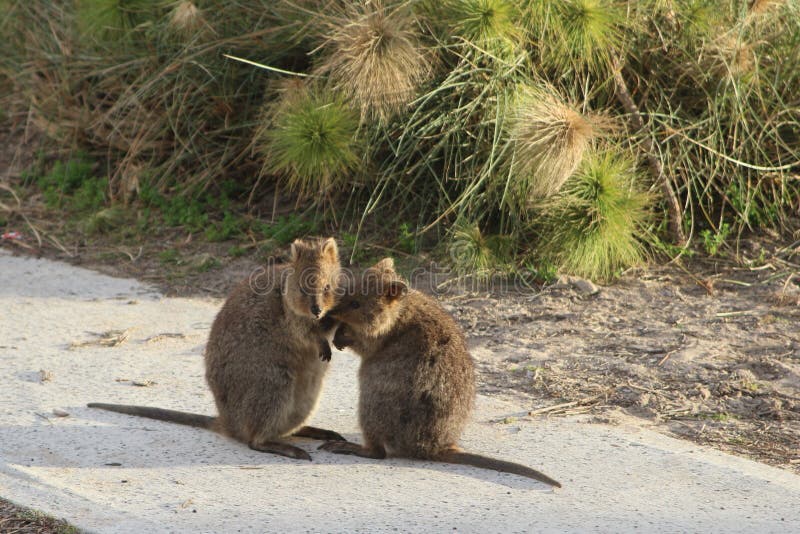 G’day, everybody–g’day before Christmas, in fact. Byron the Quokka here, to tell you that no, our Second Annual Christmas Carol Contest isn’t over, so keep requesting carols. Oh–that picture up there, those are my cousins, Felix and Agatha, who are trying to predict which carol will be the winner. Well, so far it looks like the one that got 44 views on Dec. 12. But we shall see!

The winner of the contest will get an autographed copy of Bell Mountain No. 12, His Mercy Endureth Forever, when it comes out, which’ll probably be sometime early next year. I know some quokkas who are afraid to read it because they saw the cover and they don’t want Ellayne and Dulayl to get eaten by the giant hyena. I confess to a wee bit of trepidation, myself! 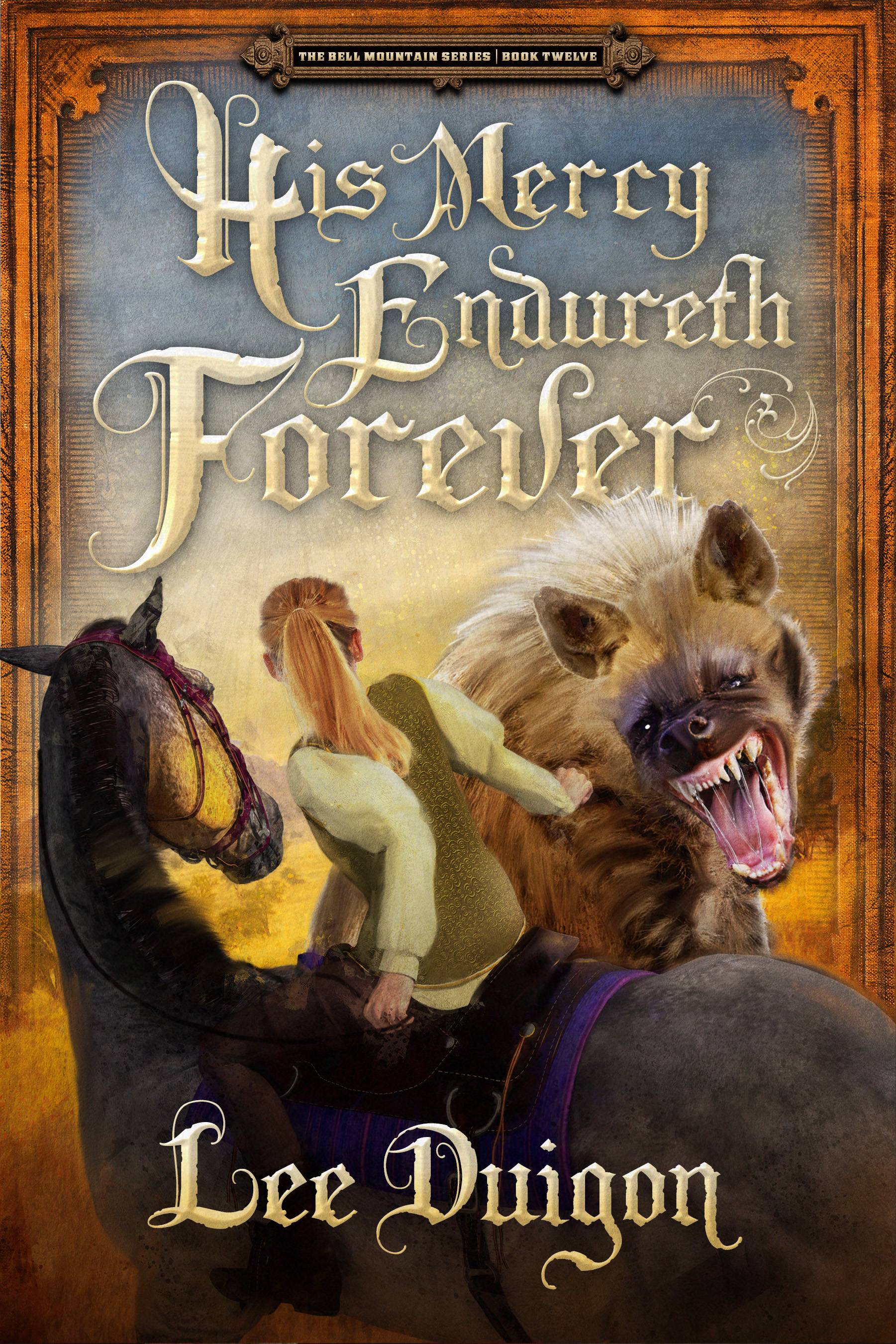 By Request, ‘The Holly and the Ivy’

By the way, the carol contest is still on and the leading carol is still on top with 44 views on the day it was posted. Can you beat that?

By Request, ‘The First Noel’

Phoebe requested this, The First Noel, so I picked this rendition by the King’s College Choir, at Cambridge.

As for the carol contest, the leading carol has 44 views; that was 12 days ago, and no one’s come close since.

Only four days left till Christmas!