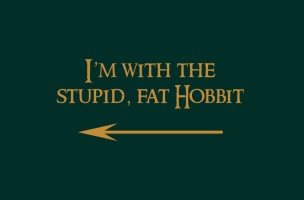 Sitting in the eye doctor’s waiting room, I picked up a copy of Entertainment Weekly. It had a picture of a movie Hobbit on the cover and a headline, “Farewell, Bilbo.” I’m a Tolkien fan, so I picked it up and opened it.

Actually, Hobbits aren’t going anywhere. The magazine is celebrating the release of the  supposedly final Peter Jackson movie, the third in his film trilogy of Tolkien’s not very long novel, The Hobbit. The article featured Stephen Colbert done up as various characters in the Hobbit movies.

As I perused the article, it became clear to me that neither Colbert nor the interviewer had ever actually read Tolkien’s books. They’d only seen the movies. But they talked about the movies as if the books did not exist–as if there really were a subplot dealing with a big crush between a Dwarf and an Invincible Female Elf-Warrior.

If you had put a gun to Tolkien’s head and threatened him, he still would never have written such a thing.

So now there are all these people who think they know J.R.R. Tolkien because they’ve seen movies based–sometimes, as in the case of the Elf-Dwarf romance, very, very loosely if at all–on Tolkien’s books.

I remember one of my wife’s co-workers, years ago, insisting that Napoleon was an epileptic because she’d seen it in a TV movie. He wasn’t; but the ignorant screenwriters showed him as an epileptic, so this viewer “knew” he was an epileptic.

This is a great age for knowing a lot of things that just ain’t so.

5 comments on “A Tale of Two Hobbits”