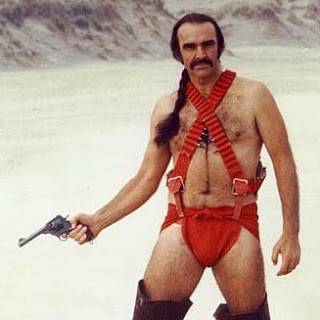 If you’re looking to veg out with some movies this weekend, here are a few that you’d do well to avoid.

Bluebeard (1972), starring Richard Burton (!) and the half-comatose Joey Heatherton, is surely one of the very worst movies ever made. I can’t be sure, because I got up and walked out long before it was over. All right, go ahead and tell me I missed all the good parts.

Zardoz (1974), written and directed and turned into drivel by John Boorman, stars Sean Connery in a pair of hot pants. It’s hardly watchable even in a drive-in with plenty of beer. Immortal line: “The p**** is evil. The p**** shoots seeds!” I dare you to keep watching.

Mandingo (1975). What was James Mason doing in this turkey? He should have shot his agent. It also stars Susan George, sounding like a cockney barmaid trying to impersonate a Southern belle (“Aah was riped!”), and boxer Ken Norton, who was probably better than Sonny Liston would have been.

Blade Runner (1982). In this overrated opus by Ridley Scott, a secret agent (Harrison Ford) falls in love with a robot (Sean Young). Psst, buddy! She’s a machine–like your car. It’s not like you can settle down with her and have a lot of little robots. Something rather unwholesome about the whole idea…

The Fifth Element (1992). I don’t know if this is the worst movie I ever saw, but I’m sure it’s the ugliest. Screenplay by a pair of French comic book writers–well, that says it all, doesn’t it? But it’s cheaper than going to see a psychiatrist. Just turn on The Fifth Element, and if you can sit through more than 20 minutes of it, you know there’s something wrong with you.

To the Reader: Please feel free to nominate any films you think I did wrong to leave out, or which, in the interests of public safety, you are sure other readers should avoid.

27 comments on “Five Movies Not to Rent”