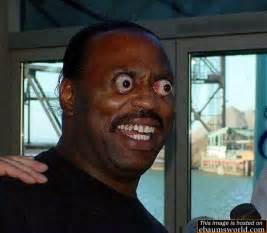 Okay, my eyes aren’t quite as bad as this guy’s. But they’re very widely dilated and it’ll take all day for them to get back to normal. The good news is the doctor found nothing wrong. And I don’t need new glasses.

Actually I had kind of a nicer time there than usual. I wound up conversing with a college professor whose family fled Cuba when she was a girl. We discovered we had many opinions in common, and enjoyed a spell of liberal/communist-bashing.

Then the doctor confided in me: the deluge of new government requirements involving computer data entry and masses of paperwork has removed most of the pleasure he has always found in his work. He also understands my refusal to give up my cigars. “You’ve got to have pleasure,” he said, “and if I gave up all the things my doctor wants me to give up, I’d be pretty miserable. Hey–my one grandmother was Jewish, and she cooked everything in chicken fat with a ton of salt. My other grandmother was Russian, and with her it was all hot water and lemon juice. Both of them died at the age of 99.”

Because two weeks of incessant rain have made it hard for me to get my exercise, I decided to walk home, hoping it wouldn’t start raining again. I remembered a short cut from my teenage years: it was still there, I took it, and all I had to do was scale a steep and slippery hill, bull my way through a bit of underbrush, and it cut about a mile off what would’ve been a three-mile hike.

And now, to work…

9 comments on “Back from the Eye Doctor’s”