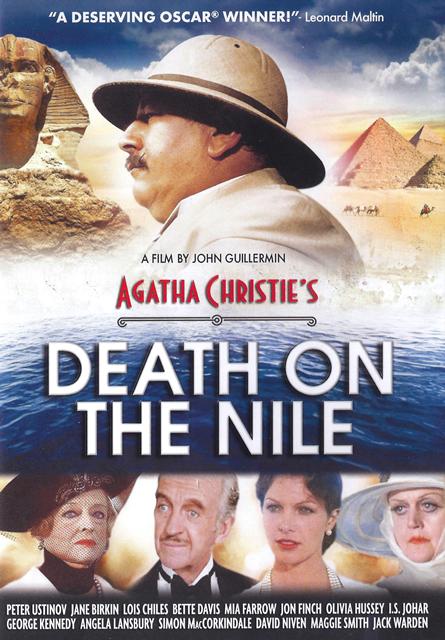 We hadn’t seen this movie in several years, so we watched it the other day and it was just as wonderful as ever.

It isn’t always easy to get an all-star cast to work together, but in Death on the Nile, the stars are out in force. What a cast! Peter Ustinov as Hercule Poirot, supported by David Niven, Bette Davis, Mia Farrow, Lois Chiles, Maggie Smith, Simon MacCorkindale, Jack Warden, Olivia Hussey–whew! With Angela Lansbury, who won an Oscar for her portrayal of an alcoholic romance writer who’s seen better days. Fantastic performances all around.

And if you like movies with lavish sets, exotic locations, and a plot that twists and turns all over the place–well, this one’s for you. Want escape? This film’s got it. For 140 minutes, you’re out of here. Much, much better than the David Suchet remake.

In a little while, we’re going to follow our New Year’s custom of watching George Pal’s 1960 classic, The Time Machine. Followed by Patty’s heavenly pork casserole for supper.