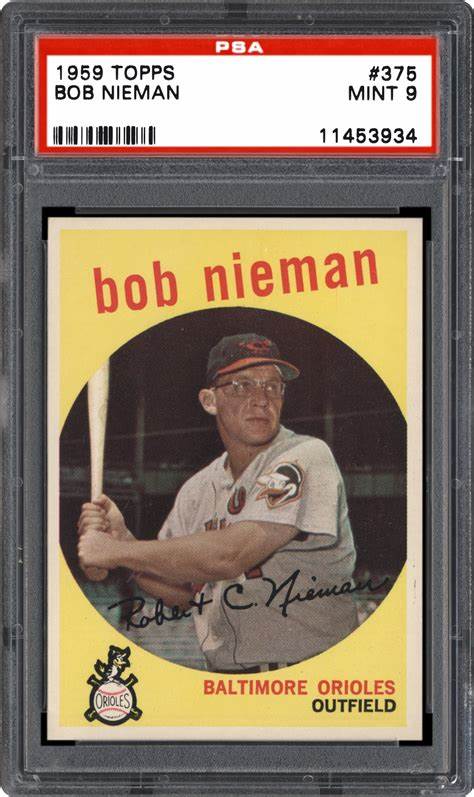 Bob Nieman, from back when Orioles were Orioles…

Orioles’, er, slugger Chris Davis set an all-time record the other night by going hitless in his 49th consecutive at-bat (https://baltimore.cbslocal.com/2019/04/08/record-setting-futility-chris-davis-breaks-mlb-mark-for-longest-hitless-streak/). He may have added to it by the time you read this.

Ah! But “Crush” has a kazoolian-dollar contract with the Orioles, who still owe him $92 million and, with deferred payments, will be paying him through the 2037 baseball season.

Last year–and we really have to wonder, what was his manager thinking?–“Crush” played in 128 games, went to bat 522 times, and hit .168. For those of you who don’t know baseball, the average person plucked off the sidewalk could probably hit .168.

I don’t want to persecute the guy, or mock him for failure–I do know what failure feels like–but I am frankly mystified that he’s still in the major leagues. Why haven’t they sent him down to the farm team to see if he can get his stroke (well, what there was of it) back? Whether he plays for the Orioles or one of their farm teams, they still have to pay him. See if a change of scene helps. What could it hurt? The guy is hitting only 168 points higher than a corpse.

It is rare, but not unknown, in baseball for a good player to suddenly and inexplicably lose his ability. Sometimes it turns out to be a hitherto-undetected injury which might or might not be correctable. Other times, no one ever finds the cause. And that’s the end of a career.

I was for much of my life a devoted baseball fan, and practically a walking encyclopedia of baseball. I still treasure baseball’s past. But today there is something, well, unwholesome about it–and about all the other pro and college sports as well. Maybe it’s the obscene amounts of money paid to athletes, some of whom can barely sign their names. Maybe it’s naming ballparks after advertisers and inventing new statistics to make mediocrity seem like brilliance. There’s something about it anymore that creeps me out, though I can’t quite put my finger on it.

Where have you gone, Bob Nieman?

9 comments on “An All-Time Record for Futility”