We watched a film classic yesterday: A Matter of Life and Death (1946), also known as Stairway to Heaven.

David Niven plays a WWII British pilot who is killed in action when he’s forced to bail out of his plane without a parachute. But for reasons that aren’t made quite clear, even though he’s supposed to die, he doesn’t.

His arrival in “the next world” is delayed by 20 hours, during which time he falls in love with an American girl (Kim Hunter). Because he has hallucinations about a “conductor” who is trying to move him on to the next world (only they aren’t hallucinations, are they?), he comes under the treatment of a neurosurgeon (Roger Livesey).

Ultimately he has to have a trial in the next world to see whether he can go on living or have to die, after all.

Now, this is an extremely creative and entertaining movie, but no one ought to watch it expecting a theology lesson. The Christian viewer has to have his wits about him, because the “next world” in the movie might be Heaven, but if it is, it’s an interfaith mish-mosh of Heaven in which pretty much anything goes, doctrinally: Plato and Mohammad, for instance, are set on the same plane with Moses and Our Lord Jesus Christ. It’s no use getting offended: this movie is a romantic fantasy, whose theme is the great power of love.

The war was still going on when production of the film began; and if you’re too young to have seen it for yourself, you need to know that World War II had its hand on everything. No one could get away from it. The war permeated every aspect of life, for everyone. Those of us who didn’t live through it ourselves might find this rather hard to grasp; I know I do. I find I don’t quite like it. But maybe that’s because I wasn’t there. Slightly older persons tell me there was something quite good about everybody being on the same page, every day. But it’s hard for me to imagine.

“The next world” is full of Allied soldiers and airmen, but no Germans or Japanese. A British or American audience of 1946 would have been scandalized to see any of the enemy in those scenes.

Anyhow, it’s something different, with a witty screenplay, high-quality acting, and will give you a few things to think about. 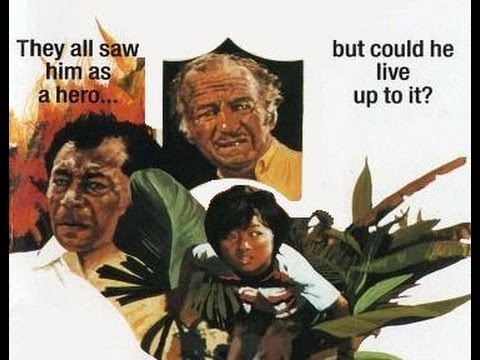 We’ve just watched Paper Tiger (1975), which Patty gave me for my birthday. We rented it once, years ago, and never forgot it. But as much as we liked it then, it blows our socks off now. At last! A movie I can turn cartwheels over.

Toshiro Mifune–not playing a samurai, for once–is the Japanese ambassador to an unnamed Asian dictatorship, who hires David Niven as a tutor for his little boy. Niven has, shall we say, padded his resume, giving himself out as a decorated war hero and international adventurer. In reality, he’s been a quiet country schoolmaster all his life. But his employers don’t know that, and he soon fills little Koichi’s head with all sorts of tall tales about his death-defying wartime heroics. In fact, he was never in the army.

Rebels kidnap Koichi and his tutor, threatening to murder them unless the dictator releases political prisoners. Things look bad, and poor Niven, now that he actually has an adventure, can’t cope. He must now confront the truth about himself, and admit that he’s a total fraud.

But it can’t stop there, because the little boy won’t let it. His faith in his tutor, and his love, force Niven to engineer their escape from the rebels. He conks out the guard, steals the car, and they barrel down a mountain with no brakes and no control. Surviving the crash, they have to push through the jungle and then climb up the mountain with the rebels chasing them and shooting at them. And I’ll stop there, to avoid spoilers.

You know what’s so cool about this story? At no time do the writers ever resort to the impossible, or even the wildly improbable. Nor does it hurt to have two of the 20the century’s greatest actors in the starring roles. On top of all that, the story is also quite moving.

Paper Tiger isn’t easy to get, but Patty finally found it on amazon.com, and are we glad we have it in our library!