[From the BBC’s “Walking With Beasts}

Behold the mighty megatherium, a sloth as big as an elephant. Hanging upside-down from the branches of trees is not an option, so what we have here is a ground sloth.

Hi! Mr. Nature here, with another one of those fantastic creatures that isn’t around anymore. Why the Lord has removed them, I don’t know; nor do I know where He put them. But lots and lots of remains of this animal have been found, so we have a pretty good idea of what it looked like.

Years ago, the megatherium was often pictured as being hunted and killed by the saber-toothed cat. But that would’ve been hard even for a sabertooth. 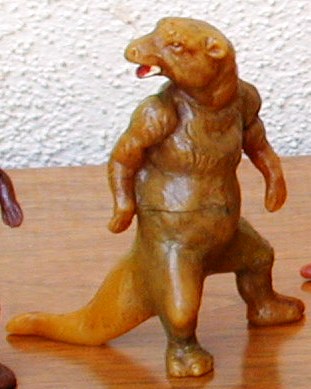 This is the Miller Company’s classic megatherium toy from the days of my yout’. It was made of wax, so not too many samples have survived.

Glory to God for creating such marvelous beasts–and for getting them out of the way when we were ill-equipped to deal with them.

5 comments on “A Sloth as Big as an Elephant”