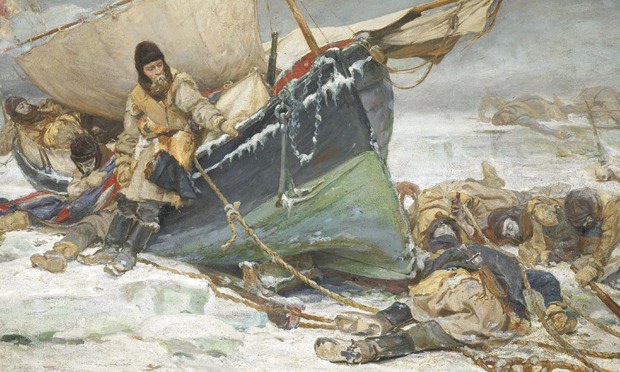 In 1845 Sir John Franklin took two British Navy ships and their crews into the Arctic to try to find and sail the Northwest Passage. The ships were never seen again, and no one from the expedition survived it.

Urged on by Franklin’s widow, and by a public clamoring to know what had happened, the Royal Navy sent out search party after search party, without success. It remained for Dr. John Rae, patiently traversing the Arctic on foot, over hundreds of miles, to discover the expedition’s fate.

But the news he brought back to England was so horrifying, so unwelcome, that his findings were rejected. Interviewing many Arctic natives, and collecting artifacts from the expedition, Rae found that the ships were destroyed in the ice and their crews, having reached land, died of exposure and starvation, with the last few of them resorting to cannibalism to prolong their lives. The men, for as long as they could, wasting what little strength remained to them, hauled behind them rowboats full of desks, books, and other useless items–irrational behavior that has led modern historians to suspect that these men were victims of lead poisoning from their canned provisions.

We have just watched a 2008 documentary from the Canadian Film Board, Passage–a gripping two-hour show that examines how Lady Franklin, with the help of Charles Dickens–yes, the famous Charles Dickens–got Rae’s story discredited and replaced by a lie. Thanks to Mr. Dickens, most of the British public believed that the members of the Franklin expedition, when they were most vulnerable and weakened, were attacked by savage “natives”… and eaten.

It’s a fact that, of the many explorers of the Arctic, not one of them ever reported being menaced, let alone attacked, by the native Inuit people. Instead, they found the Inuit friendly and helpful.

The Franklin Expedition came to grief because it was too big to live off the land, it was improperly equipped, totally untrained for survival in the Arctic, improperly provisioned, and had no business being there.

What the public wound up with was a story that was a lie, a slander against the Inuit–because it was impossible for Victorians to believe that Christian Englishmen could ever be reduced to cannibalism. We learn from the documentary that the Inuit found this libel hard to bear: and that it took an apology from Charles Dickens’ great-great-grandson to heal the wound.

Not that the great-great-grandson had anything to apologize for.

I’ve gone on a bit longer than I meant to, but only because I have an abiding interest in history, and I know how hard it is to know what really happened, even without people actively spreading lies and fictions. Poor Dr. Rae! He discovered truth that no one wanted to hear; so they replaced it with a lie. Makes you wonder what other truths of history have been successfully replaced by lies.

Anyhow, Passage is a fascinating film and I strongly recommend it.

7 comments on “A Doomed Expedition–and an Enduring Lie”