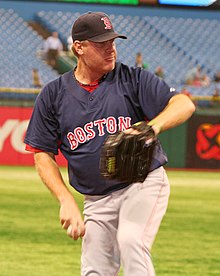 Welcome to another day in Obamaland, capitol of the fallen world.

Today’s exercise in lying for its own sake is by the sports network, ESPN, who deleted Curt Schilling’s famous “bloody sock game” from its documentary about the Boston Red Sox’  come-from-behind victory over the New York Yankees in the 2004 American League Championship Series. ( http://www.breitbart.com/big-government/2016/05/02/espn-erases-sports-history-network-edits-schillings-bloody-sock-game-red-sox-versus-yankees-documentary/ )

Down three games to none in a best-of-seven series, the Red Sox went on to win four in a row.

Schilling pitched Game Six on an injured ankle, bleeding into his sock throughout the game, gave up only one run in seven innings and was the winning pitcher. In its original hour-long documentary, ESPN devoted 17 minutes to that remarkable game.

But then last month they fired Schilling as a color commentator because he wouldn’t hop aboard the transgender bandwagon, and made the mistake of making his feelings known on Facebook. ESPN, claiming to be “an inclusive company,” promptly excluded Schilling from the broadcast booth. Only people who support  the transgender movement are allowed on the air.

The fact that Schilling has been an outspoken Republican all his life has absolutely nothing to do with it.

Hey! Remember, oh, 60 years or so ago, when we used to make fun of the Soviet Union for telling bare-faced lies about history? Sort of making it up as they went along?

Well, okay, now it appears that anybody who is not, like, totally PC on transgender issues, Climbit Change, amnesty for Undocumented Migrants, and all the rest of it–well, that kind of person not only never did anything good, never did anything worth mentioning, but really never did anything at all. Never existed, even. Someday you will look in the baseball record book for details of Curt Schilling’s long and achievement-filled career… and you won’t be able to find him.