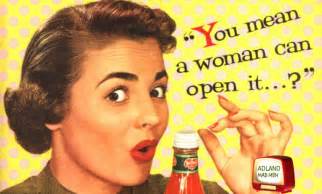 When I was a boy, our popular culture often depicted women as trivial creatures who couldn’t do much of anything and whose primary interests in life were clothing, hair, and gossip. Just search “women in 1950s commercials” and you’ll see what I mean.

If the media had to take notice of a woman who had actually done something, pains were always taken to argue that she was “still a lady, still daintily feminine,” still bedazzled by a new dress, even while she ran a business, made a scientific discovery, or wisely managed her household.

The overall impression I got, as a 10-year-old boy, was that women were, well, boring. But then I knew my mother and my grandmothers and my aunts were not at all boring, not trivial, not silly or anything like that. It made for some confusion.

I think we can all be happy that this isn’t done anymore. Except by the fashion industry, Hollywood, fantasy novelists, and feminists. And men, for that matter, are now trivialized, too. Except for when we’re demonized. Our popular culture has a lot not to recommend it.

Women are not trivialized in the Bible. And if we cannot see that the Biblical images of women are infinitely truer to life, as we ourselves live it, than anything slopped out to us by the advertising and entertainment industries, and by liberal politics, then our vision doesn’t amount to much. Think of Phebe, servant of the church at Cenchrea, and a deacon, who picked up Paul’s epistle in Corinth and delivered it to Rome. Think of literally hundreds of other examples.

And I would not be writing this, or anything else, but for my wife’s wisdom and diligence in managing our household–not to mention also having to manage Aunt Joan’s finances and paperwork, too. The work she does is staggering to behold.

Moral: The way they show it to us isn’t like it is.

If it were, the human race wouldn’t last another week.

(P.S.–I know “Phoebe” is normally spelled with an “o”, but I’m going with the spelling I find in my own King James Bible.)