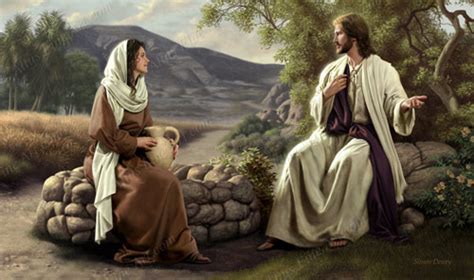 It’s early in the afternoon, and Jesus and His disciples are passing through Samaria on their way to Galilee. Jesus is alone now, sitting on a well: the others have gone on ahead to buy provisions. Jesus is, the Bible says, “wearied with his journey.” And thirsty, too.

This is John 4, for me one of the most visual chapters in the Bible and fascinating for other reasons, too.

As Jesus rests, along comes a Samaritan woman from the nearby town, and He asks her to give Him a drink. It shocks her: He is a Jew, and Jews and Samaritans have nothing to do with one another. They’ve been feuding for centuries, and each considers the other unclean and heretical. Please don’t ask me to explain exactly who the Samaritans were. Suffice it to say that the Jews of Jesus’ time considered the Samaritans the lowest form of human life.

But one thing anyone can see:

Jesus and this woman have never met or heard of one another, but He, because He is the Christ, knows the intimate details of her life. She runs back to town and cries, “Come, see a man, which told me all the things that ever I did: is not this the Christ?” For she was shacked up with some guy in town, and Jesus knew it. And all the Samaritans in this Samaritan town, after Jesus had stayed with them for two days–a shocking thing for any Jew to do–believed in Him: “not because of thy saying,” they told the woman, “for we have heard Him ourselves, and know that this is indeed the Christ, the Savior of the world.”

Some of you have already pointed out a few of the lessons we can draw from this incident. To me, what stands out about it is the contrast between Jesus’ reception by these Samaritans and His rejection by so many of those who should have been His own people. “He came unto His own, and His own received Him not” (John 1:11).

In chapter after chapter, following John 4, Jesus reveals Himself and His mission to His fellow Jews–Pharisees, lawyers, and crowds of ordinary people–and they won’t believe Him. True, ordinary people who see Him perform miracles, they believe Him–although the crowd whom He fed miraculously with a few loaves and fishes, in John 6, they’re impressed by the miracle but completely fail to grasp its significance. One gets the feeling they think Jesus is all about them getting free stuff. That is an error that still persists in certain churches.

No matter what Jesus says or does, even when He performs miracles right before their eyes, His own people don’t believe Him. But the despised and hated Samaritans, starting with this woman who’s somehow gone through five (!) husbands and is now living in sin with a man who’s not her husband–these people hear Christ and believe Him!

God’s grace is astounding to behold.

And now I back out of the theology shop, before they make me pay for anything I might have broken.

One comment on “Jesus and the Woman at the Well”