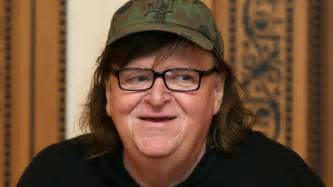 (Worships the creation, not the Creator)

So far, the biggest dope in America today is Michael Moore, who says President Donald Trump has actually caused “the extinction of human life on earth” by signing an executive order to undo some of President *Batteries Not Included’s Climbit Change regulations ( http://www.breitbart.com/big-hollywood/2017/03/28/michael-moore-trump-caused-extinction-human-life-earth/ ).

Moore warned darkly that The Planet itself–it seems he views it as a kind of deity–is “paying attention” to current events and will take action on its own to get rid of a species–mankind–that’s “hell-bent on destroying Earth.”

President Trump said his executive order gets rid of bad, unnecessary, job-killing regulations and puts an end to the previous administration’s “war on coal.”

Moore calls upon his fellow left-wing nitwits to “resist.” You know–like Trump’s the Nazis and they’re the French Resistance, bravely singing La Marseilles as they face the SS firing squad… Oh, please.

But don’t worry, Michael. Some other idol-worshiping left-wing pagan is sure to come along and be a bigger dope than you.