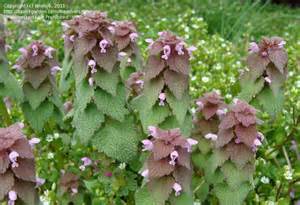 The first plant to come up in my wife’s little garden, this year and last year, is the purple deadnettle.

Hi, Mr. Nature here–and it’s called the “dead” nettle because it doesn’t have a sting like the real nettle. It’s a member of the mint family, memorable for its delicate purple flowers and its leaves that are arranged like a stack of dishes. It grows all over the place, around here.

Bob Bakker–the scientist who, more than anybody else, popularized the concept of warm-blooded, active dinosaurs–once told me one of the things that most draws him to God is the self-evident delight which the Creator takes in His creation. I agree! Even this fallen world, the Father stocks with beauty. Even the weeds!

I was happy when I read that a lot of people have come to appreciate the deadnettle for its beauty and are now planting it on purpose, usually as a border for a garden, and because it so delights our eyes.

Give thanks for the beauty of God’s handiwork: it tells us something good about its Maker.

2 comments on “A Welcome Weed”