The tiger salamander is one of the largest salamanders in North America; and if you find one, and insist on feeding it an earthworm, you may find he’ll bite the hand that feeds him.

Y’know, for the hundreds of hours of my boyhood that  I spent looking for salamanders, I never once found a tiger salamander, although they’re supposed to be not that uncommon in New Jersey. Mostly I found just those little redbacks; a tiger must be as big as 20 of those guys.

So I’ve never been bitten by a salamander, but I’ll bet the tiger’s bite packs a wallop. It just might be worth getting bitten if you can have a close encounter with one of these impressive critters. Like, how bad can it be?

The little brown anole lizard can’t resist the mealworms included in the snacks at the bird feeder. He’d better watch out or he’ll wind up as bird food, too. Notice how skillfully he disappears whenever the blue jays show up, to reappear just as smoothly after they leave.

I have included this video in today’s program to discourage high-risk behavior by lizards.

Yeah, sure, I’ve got stuff to write, no shortage of it–but would you mind if I had my cigar and took a snow break? I’d like to enjoy the snowflakes while they’re here. So much more enjoyable than nuisance phone calls.

(What’s with the lizard?)

Oh, I just love these little guys–green anoles, aka pet-store chameleons. The head-bobbing and the strawberry throat fan are threat displays, warning the human with the camera to back off if he knows what’s good for him. As pets, they get very tame and you can have a lot of fun with them. But they won’t do threat displays anymore… except to each other, now and then. Maybe they’re just keeping in practice.

Jambo! Mr. Nature here; and today’s safari takes us to the inland sea of what is now Kansas–and Elasmosaurus, one of God’s creations that has puzzled science for over 100 years.

This was a plesiosaur, a marine reptile, with an insanely long neck. There were many species of plesiosaurs, all following basically the same body pattern… which can be described as a snake with the body of a sea turtle. Many artists have depicted the Elasmosaurus’ neck performing wild twists and turns and arabesques, but the actual skeleton doesn’t support that. The neck was probably much less flexible than that.

One of America’s two greatest 19th-century paleontologists, Edward Cope, reconstructed Elasmosaurus with the head attached to the tail. Legend has it that the other greatest paleontologist, Othniel Marsh, publicly shamed Cope by pointing out his error (“Ha, ha, you did it backwards!”)–after which the two scientists became mortal enemies locked in a fierce competition which has come to be called “the Bone Wars.”

We still don’t know how this animal reproduced itself or how it used its preposterous neck. (Not as crazy as the neck of Tanystropheus, but it seems that where prehistoric animals are concerned, anything goes.) Well, it must have worked efficiently, or there would have been no Elasmosaurs.

I really love these weird creatures, even if I can’t explain how they managed their everyday lives.

Oh, that Golden Treasury of Natural History! I couldn’t get enough of it. Dinosaurs and woolly mammoths! By the time I was in third grade, they used to have me visit the other classrooms and give a little talk on dinosaurs. “Just like listening to a professor at college!” the school secretary once said.

At a very early age I already had an unquestioning belief in Evolution, whatever it was. Why not? Nobody questioned Evolution! Darwin wins, hands down. We started out as parameciums or something and wound up with Mozart. All the books said so.

But the Bible did not say so. And yet, like the rest of America, I toodled off to Sunday school or church on Sunday morning and never suspected there would be even the slightest flaw in my belief system. We were all Christians, weren’t we? (I was including Jews.) I was just a kid, but I never heard an adult question Evolution.

But I’m afraid my beliefs have evolved since then. I have lost my faith in Evolution.

In the beginning, God created the heavens and the earth. That’s the first sentence in the Bible. Everything follows from it. I mean, if you literally start quibbling with it from the get-go, how far are you going to get with the rest of it?

God did not leave us blueprints, recipes, or a here’s-how-you-do-it manual. He’s left us with plenty to find out on our own. We’ll have plenty to study in the sweet by and by.

Either God is the Almighty, the Creator, and the ultimate supreme Authority, or He is not. And if He is not, then who is?

I don’t like any of the answers proposed to that question. God protect us from all-devouring governments. God save us from the know-it-alls.

I still love dinosaurs. God created them. We don’t have them here among us anymore, but God has the entire universe at His disposal.

And I don’t believe in Evolution anymore. The more I study the matter, the less sense it makes. All it does, in the long run, is leave us marooned on a truly barren desert island.

Have any of you had mice for pets? Honk if you’re put off by the very idea.

But I’m here to tell you… mice are nice.

How something as tiny as a mouse can form an affectionate bond with something as big as a human being is worth pondering.

The coyote wants the chicken. The goats don’t want the coyote. It’s a standoff, three goats vs. one coyote. I wish we could know what the chicken thought of it. Sit back and see who blinks first.

A man sets up an eight-part puzzle to see if a crow can solve it. Heck, we have Congressmen who couldn’t solve this! But the crow uses the sticks and stones provided, figures out how they’re interrelated… and solves the puzzle, earning a reward of food.

Looks like the proverbial “bird brain” is badly underestimated.

I’ve wanted to post this little video for a long time, and it’s finally available–a brief visit with extinct mammals called Chalicotheres–or “knuckle bears,” if you’re already acquainted with them via Bell Mountain.

Is it a kind of horse? A gorilla? A grounded tree sloth? Or some weird combination of the three? Their fossils have been found in North America, Africa, Europe, and Asia.

Anyway, I thought this might provide a welcome break from nooze. God’s creative work knows no bounds. Let’s appreciate it! 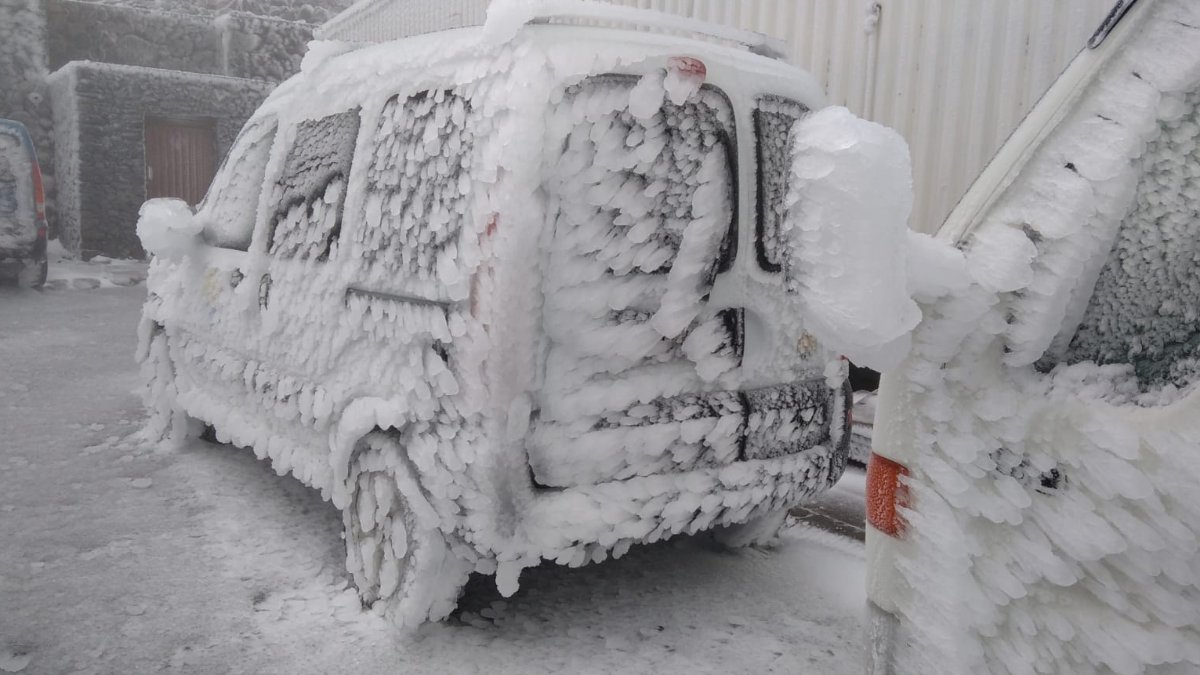 Would you believe this picture was taken in the Canary Islands? Yeesh!

It’s really hard to jabber about Global Warming when it’s 64 degrees below zero–which is what the thermometer read the other day in Rabbit Kettle, Northwest Territories (Canada). The last time it got that cold up there was in 1980, when it was 67 below.

But check out that AccuWeather report, above. It was one below in Nashville. TV–a new record low. A couple of people up in Buffalo have died as a result of extreme winter weather.

Well, that’s why they had to repackage Global Warming as Climate Change, isn’t it?

In their wildest dreams and fantasies, do puffed-up “scientists” and globalist big wigs really, truly, honestly believe that they can control the whole world’s climates? Note that I did not say “climate.” That’s because there is no such thing as a world climate. What we have is a whole bunch of different climates, depending on where you are, the time of year, and local weather conditions which constantly change.

Constant change is the rule of life on a living planet. We are on the only one we know about. We do not own it. We do not control it.

And Barack Obama, John Kerry, and Klaus Schwab can go to blazes.

P.S.–Both our cars have their doors frozen shut. Oh, fap!