Yesterday we posted a video of an opossum fooling two dogs by playing dead–“playing possum.” The act can fool humans, too.

But voila! Here’s a harmless little snake that does the same thing. If he feels threatened, the hognosed snake will put on a fierce threat display; and if it doesn’t work–well, then it’s time to play dead. Upside down, tongue hanging motionless: he’ll even release a chemical that makes him smell dead.

Hognosed snakes in zoos and homes stop playing dead because they don’t feel threatened anymore. As the top item on their menu is live toads, I don’t recommend them as pets. But it’s cool that God gave two such widely unrelated animals the same almost-unique from of self-defense.

Jambo! Mr. Nature here–with a reminder that even though our key social and political institutions can be debauched and broken by human wickedness and stupidity, and stolen out from under us by Democrats… God’s stuff still works.

Behold the flounder, which most of us know best as fillets in the seafood section of our supermarket. Many of us have caught them on hook and line. But how many of us have ever seen them change color? Well, not many, because it happens underwater.

But change color they do, like the chameleon, like the octopus; and being flat, with both eyes on the same side of the head (the top side), helps them to hide in the sand. Oddly enough, when they’re born, the eyes are on opposite sides, like they are in other fish. They migrate as the flounder matures. Actually I think that’s even more remarkably odd than the color-changing.

All these weird little things about the flounder–put them all together, and you have a very successful fish.

How about some of God’s stuff, instead of man’s?

Red efts are immature Eastern newts. They live on land instead of in the water. When they grow up, they turn green and head for the nearest pond.

I can’t think of any other animal clad in this vermilion shade, and I’ve never seen video that quite fully captures the brilliance of this color. The eft can afford to be conspicuous: any animal that eats one has poisoned itself. Like toads, efts’ skin is full of toxic chemicals.

It’s easy enough to refraid from eating them; and we can enjoy their gorgeous color to our hearts’ content. 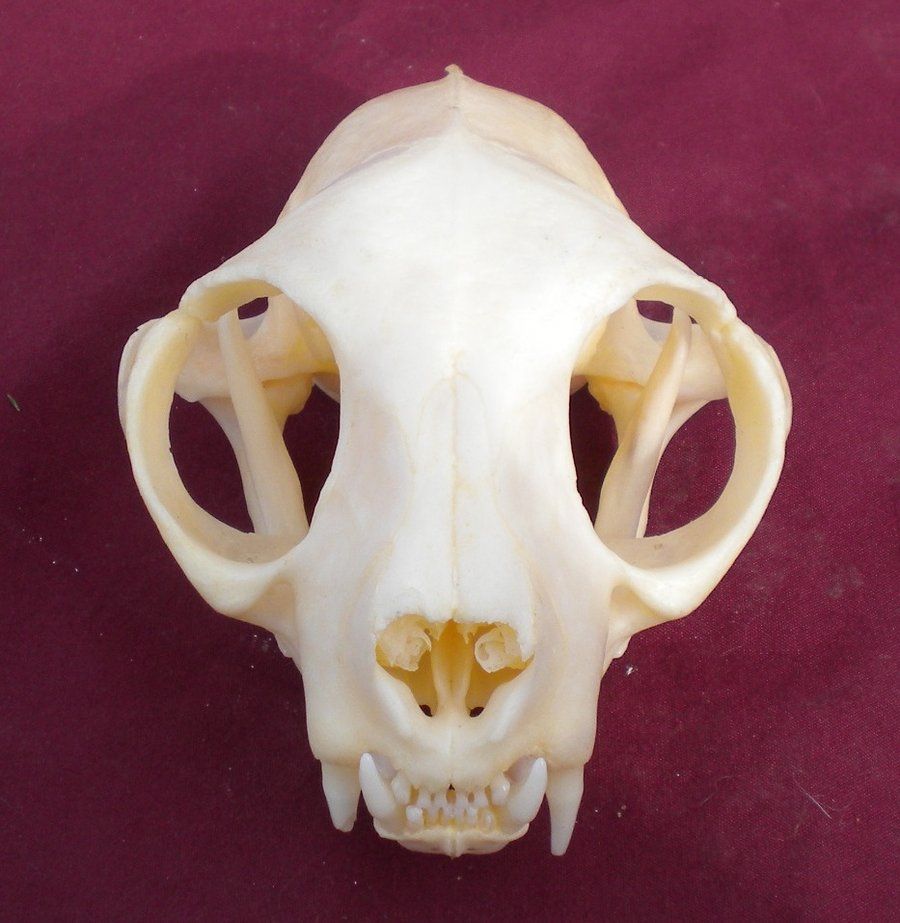 Petty’s friend emailed her a picture of a small skull that a squirrel was carrying around her yard today, and she wanted to know what kind of skull it was. So she asked me to identify it. All those hours of my childhood spent poring over Mark Trail comics in the Sunday newspaper have to be good for something.

My first thought was “cat,” although the skull seemed kind of small for a cat’s. (That’s a cat skull, above.) It obviously belonged to a carnivore–long, sharp fangs, large muscle attachments for a powerful bite. I was able to rule out skunk, badger, and weasel. What other kinds of small carnivores do they have in Florida? Everything was saying “cat” to me except the size: only three inches long.

I have to admit I’m stumped. Of course, Florida is tricky for the amateur zoologist because of all the exotic animals that have been introduced there. It’s not a mongoose. What else have they got running around there? Or is it really just the skull of an unusually small cat?

If any of you out there live in Florida and would like to pinch-hit for Mr. Nature, please be my guest. 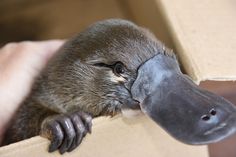 Mr. Nature here, with possibly the oddest creature on the planet–Australia’s famous duck-billed platypus. In fact, the animal is so odd that when the first specimens arrived in England, scientists thought it was a hoax.

The platypus is a mammal, or so they say. But it has some weird un-mammalian features.

Its legs are positioned out to the side, as in reptiles, instead of directly underneath the body, as in most mammals.

The babies hatch out of the eggs with teeth, but lose them later on.

The male has poisonous heel spurs that can inflict intense pain on a human being. Very few mammals are equipped with venom: only the solenodon springs to mind. But lots of snakes, and some lizards, are poisonous.

But the platypus does have hair, and plenty of it, the mother nurses the babies on milk, and as far as the science of taxonomy is concerned, platypuses are mammals in good standing–not some weird little group of their own that displays both mammalian and reptilian features. That went out with the Triassic Period.

And we can admire the Creator’s creativity!

Jambo! Mr. Nature here, and today’s safari is a proper safari that takes us to somewhere in Africa to look in on the zebras.

The waterhole can be a dangerous place for zebras. Ambush predators are seldom far away. These zebras are barking up a storm and going on the alert because one of them has detected a lion nearby and given the alarm.

You’d think a striped horse would sound more like a horse; but nothing sounds quite like a zebra. I used to want to be one, when I grew up; but I never did master the zebra bark.

Jambo! Mr. Nature here, and our safari today takes us to Australia and New Guinea in search of the spiny anteater, aka “echidna,” named for a creature in Greek mythology that was half-snake, half-woman.

These are really weird animals. For one thing, they and the duck-billed platypus are the only mammals that lay eggs. For another, they have the second-lowest body temperature among mammals, behind the platypus. And they’ve got a cloaca instead of separate reproductive and excretory organs. It’s sort of odd that they’re considered mammals at all. But they do have hair, and the babies, once hatched, are fed on milk from the mother’s body. Besides which, what else are we to call them?

As you might expect, they eat ants and termites; and aboriginal people sometimes eat them. No accounting for tastes. They look a lot like hedgehogs but aren’t related to them. They don’t look like platypuses, but those are their closest relatives.

God’s stuff–brought to you by a truly versatile Creator.

Jambo, everybody! Mr. Nature here–with a tiny African frog that sounds just like a dog’s squeaky-toy.

Actually, this frog is angrily defending his territory. He needs to work on his threat display. Puffing himself up, that’s a popular frog tactic. It’s the squeaking that makes him as cute as a button.

Behold the paddlefish, peacefully going about its business of feeding on microscopic plankton. Like the basking shark, it swims with its mouth gaping wide open, with its gills to filter out the goodies. If it weren’t for the paddle, you might mistake it for a freshwater basking shark.

But it only looks like a paddle. It’s packed with special sense organs to help the fish find food.

Paddlefish fossils are found all over the world, but today these fish live only in the Mississippi River and some of its tributaries. Up until recently they also lived in China; but with their customary reckless disregard for just about everything, the communists have driven the Chinese paddlefish into extinction. Along with the freshwater whale… and the Chinese alligator has just about had it, too.

I would love to see one of these in person, underwater. But it ain’t gonna happen in New Jersey.

Before we move on to any demoralizing nooze, here’s Mr. Nature with a safari to the ocean floor in search of sea spiders. Please feel free to ignore the cutesy narration.

Very few of this have ever seen one of these critters, and most of us have probably not heard of them. Which is odd, because there are hundreds of species of sea spiders and they’re found world-wide in both deep and shallow water. But as most of them are very small and quiet, it would be easy not to notice them.

I’ve been fascinated by these creatures for a long time. How can you not be fascinated by an animal whose vital organs are in its legs because there’s no room for them in its body?

Fap to the evolution fairy tale. What hath God wrought!