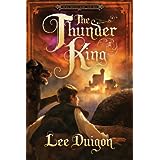 I’m often asked, “Where do your books come from?” Well, I could say “New Jersey,” but what they really want to know is how a book gets started.

I can’t answer that, because there are as many starts as there are books. But I can tell you how one of my books, The Thunder King (Bell Mountain No. 3) got started.

It started with an image that popped into my head, a small boy riding a Baluchitherium, the largest land mammal that ever existed. This was very vivid to me, and served as the germ of the story. How was I to get the boy onto the Baluchitherium, and why did I want him there in the first place? What were the two of them going to do, and how would they do it?

Next, a new character showed herself: an old woman living in the city of Obann, not doing much of anything until she becomes a vessel of prophecy. And next thing I knew, I imagined her standing in the rain, soaked to the skin, white hair blowing in the wind, and crying out, like Moses, “Now see the salvation of the Lord!”

When I put those two images together–the boy on the Baluchitherium, and the old woman in the storm–they became the ingredients of a climax for a new book. And all I had to do was figure out how to get there. So I had the ending of the story first, instead of the beginning. That was The Thunder King.

Even now, I find the hardest thing to do is to wait for God to send me something that I can work with. The weather’s getting nice and I’m eager to get started on a new book, but I’ve learned it doesn’t work that way. I can’t command it to happen. I can only wait–and I know by now that whatever I’m given, it’ll come as a surprise.