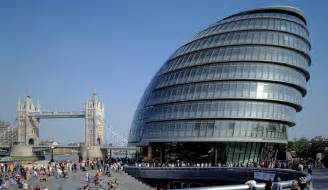 That’s how former London Mayor Ken Livingstone describes London City Hall: “the glass testicle.” He is being kind. If this is not the ugliest building on earth, I don’t know what is.

This architectural monstrosity opened in 2002 after some 43 million pounds were spent building it. Its grotesque shape was supposed to make it more energy efficient, but then they used so much glass in its exterior that it has turned out to be one of the more energy inefficient dumps in London. Science marches on.

It reminds me of an unfortunate typo once seen in a newspaper real estate ad, which read, “You can’t heat this one!” It’s probably a bugger to try to cool it, too.

What hope is there for adult human beings, charged with the responsibility to handle vast amounts of money, able to employ the most highly-regarded experts money can buy, who wind up building something that looks like a badly rotting jack-o’-lantern? I mean, we give you 43 million pounds and we get this? Did humans actually perpetrate this fiasco, or did we have to bring in some demented race of space aliens to get such truly abysmal results?

If you are ever tempted to believe in the self-perfectibility of man, take another look at London City Hall.

4 comments on “The Glass Testicle”