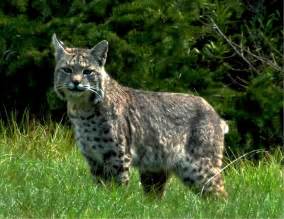 See what happens when you leave your doors and windows open?

Earlier this week, in Washington Township, NJ, a bobcat strolled into someone’s house and totally freaked out a woman and her two children, who fled to the safety of the bathroom (http://www.nj.com/morris/index.ssf/2017/06/bobcat_traps_mom_2_kids_in_washington_township_hom.html#incart_river_home_pop  )). There they remained for an hour or so, until police arrived and shooed the cat out of the house.

But dig this bit of journalistic prose: “… and after opening the exterior doors and kitchen windows, the bobcat left…” See, we toldja cats are smart.

If people were not so disconnected from the natural world, they wouldn’t be so scared of it. A bobcat weighs, oh, 20 pounds or so. Maybe 30. Yes, it could scratch or bite you, if motivated to do so. But so could any pet domestic cat. Who ever heard of anybody being killed and eaten by a bobcat? I’ve had neighbors who were terrified of baby skunks. If they should ever see a bobcat–!

Animals who live in close contact with humans may lose their fear of them–which is a lot more dangerous for the animals than it is for the humans–and be tempted to follow a nice aroma through the open door of a house or garage. So keep your doors shut, if you live in such an area.

But it’s hardly like you’ve got a lot of velociraptors stalking Washington Township, NJ, is it?

3 comments on “Mom, Kids, Trapped in Bathroom by Savage Bobcat”