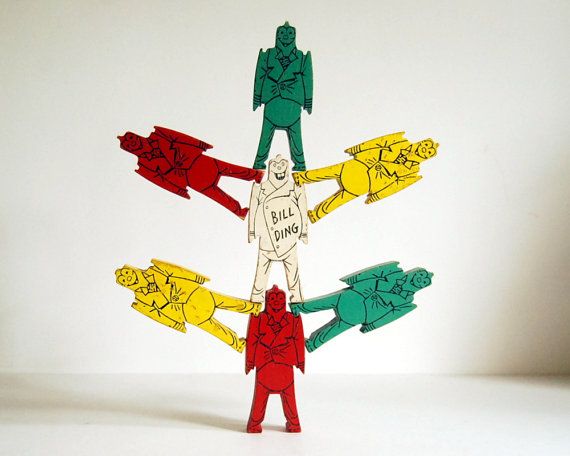 Remember these? “Bill Ding Blocks,” they were called, made of wood and brightly colored. They were also called “balancing clowns.” Those strangely leering little figures were supposed to be clowns. And if you were patient, with a light touch, you could set them up into all sorts of improbable arrangements. I used to play with these with my friend, David, next door. We were little more than toddlers at the time, and improbable arrangements were beyond our powers.

Bill Ding Blocks first came out in 1911. In the early 1960’s the company that made them was bought and the product discontinued, but the owner believed in his product and eventually bought back the rights to it. Today they’re manufactured in China. It does seem a shame not to make these in America.

David and I enjoyed these unusual blocks; but I think if we’d looked more closely at the faces, we might’ve had second thoughts. Happy memories, though. Happy low-tech memories.