Once upon a time, Spartan warriors had to listen to this song before they went to battle.

Dagnabbit, I miss the drive-in! What could be better than packing a cooler full of snacks and going to the drive-in… to revel in Godzilla  vs. Giant Panty-Liner Bugs from Orion, or something equally edifying?

Memory Lane: A Night at the Drive-In

But around here, all our drive-ins are long since gone. The only sign they ever existed is the wasteland where the Amboys Drive-In used to be, on the bank of the Raritan River. There they tore down the drive-in and the indoor theater and never put anything in its place.

If you were born after, say, 1990, it might strike you as very strange that once upon a time in America, every male, with only a few exceptions, had to serve in the army whether he wanted to or not. But it’s true. When I was a boy, every male over 18 had to register for the draft and pretty much everybody got sucked up. (Well, God told us through Samuel what a king would do to us, didn’t he? Too bad we didn’t listen.)

And so The Phil Silvers Show, also known as simply Sgt. Bilko, struck a universal chord back then that it doesn’t strike anymore… because we have no draft, thank God.

Sgt. Bilko (Silvers) was a smooth con man working in the motor pool and being a thorn in the side to his commanding officer, Col. Hall. Paul Ford was just great as the hapless colonel, perpetually bamboozled by the slippery sergeant.

This was an awfully funny show, although a military draft is not funny at all. God did warn us about increasing the size and power of the state (I Samuel Chapter 8)–but no, the people had to have a king like everybody else! The show ran from 1955 through 1959 and was very popular. Gee, I can hardly believe I was only 10 years old when Sgt. Bilko went off the air.

You have no idea how badly I wanted to try this, when I saw it on TV circa 1962. Shooting a Bic pen out of a rifle! Bam! Or a crossbow. Or you could use it to drill through a wooden plank, or even attach it to a figure-skater’s skates! And it would still “write first time, every time.” Even if the rest of the pen was totally destroyed.

True, some of us actually used ballpoint pens only for writing. You didn’t always have a crossbow handy. Uncle Ferdie had a rifle, but wouldn’t let us use it to shoot Bic pens at boards. (How could the man be so selfish?)

I wonder if there is anybody in the Defense Dept. working on top-secret military uses for ballpoint pens. That “dyamite” ball is “the hardest metal made.” Should be good for scaring off the Russians. 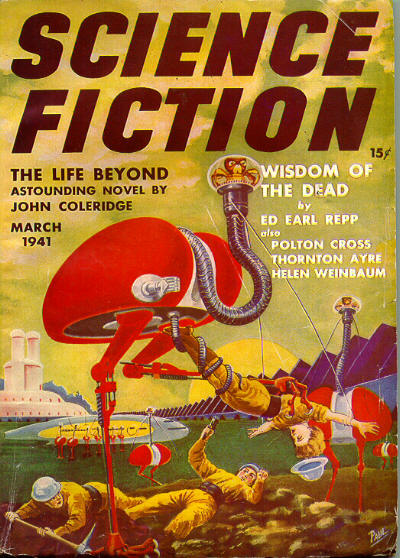 When Patty and I were teenagers, there were still science fiction magazines full of cool stories to delight us.

So back in high school, a few of us got together to create and publish our own science fiction magazine, The Diomegan. All original material. The first issue was mimeographed (remember that–purple ink that smelled funny?). For the second, we did some collating work for a printer in return for him printing The Diomegan.

What a staff we had! I was art editor. We had William A. as editor in chief–a genius: you should’ve seen him wipe out the competition on TV, on College Bowl–and Jeffrey T. as science editor: later he became president of the historic Marshall Chess Club in New York City. He also built his own computer while still a high school student. In 1966!

We had Marian P., a true eccentric, and a sophomore named Joe M., who wrote weird science fiction/spy stories. And a couple of “regular” kids who helped us out a lot. We went to science fiction conventions in New York, where we met Arthur C. Clark.

We sold our magazines in a local book and stationery store and earned just a few dollars each; but we weren’t in it for the money.

Gee, I’d love to see “Smitty” and Marian again! I wonder how they made out. Last I heard, William A. had grown as rich as Croesus; and that was no surprise.

And yes, I’ve kept my copies of The Diomegan.

I had a bad night with my allergies; but it would have to be a very bad night indeed, if this hokey old TV series couldn’t lift my spirits.

In Search Of ran from 1977 to 1982 with Leonard Nimoy as the host. Because he became a major star by playing Mr. Spock on Star Trek, we tend to overlook the rest of his long TV career. This included his stint on In Search Of.

This show had everything! As World War II paratroopers used to say, “It’s foolish but it’s fun.” Missing persons, lost cities, UFOs, cryptozoology… and a neat disclaimer reminding viewers that “this series is based in part on theory and conjecture.” Lots and lots of conjecture! And by no means was it nothing but hooey. After all, for example, Amelia Earhart really did disappear on an attempted flight across the Pacific.

But the thing that really made it go was Nimoy. He had just the right amount of gravitas–no mean feat for an actor best known for pointy ears and the Vulcan nerve pinch. They came out with a remake in 2018, but without Leonard Nimoy it just didn’t work.

And you can watch all the episodes on YouTube! Next time you’ve got insomnia, have a little fun with In Search Of. 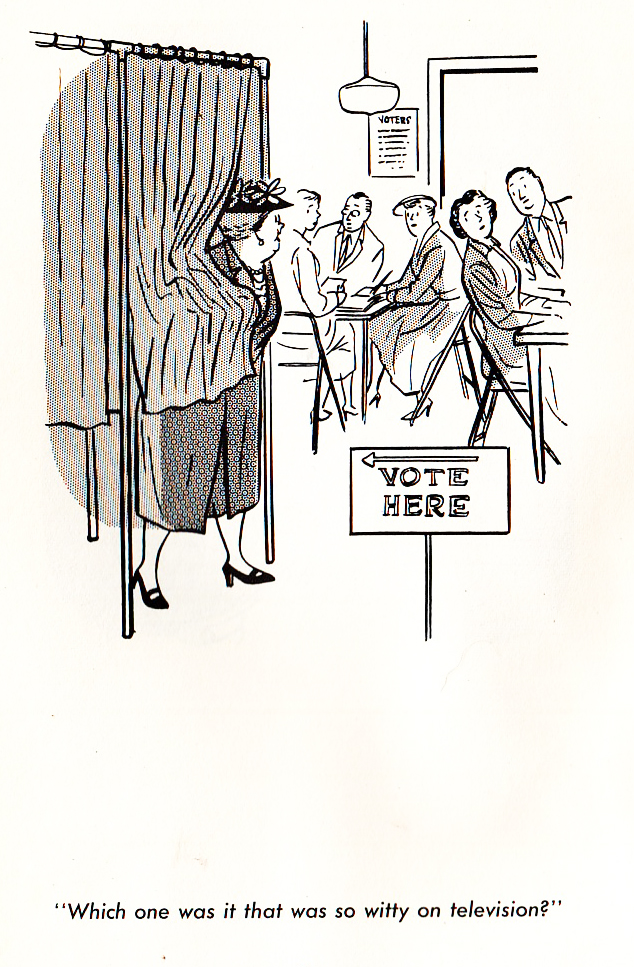 This was another gentle and benign cartoon series, this one from the 1960s–The Girls, by Franklin Folger.

“The girls” were middle-aged women going about the blameless business of their everyday lives, making mild blunders guaranteed to raise a smile. Most of us probably had an aunt who would’ve fit right in. We might smile at some of the things she says and does, but we love and treasure her.

I can’t imagine how hard it would be–well, hard for me, at least–to draw The Girls every day (and when it comes to drawing, I’m not that awful). And come up with really funny one-liners to go with it. Mr. Folger must’ve been a genius.

I don’t know how many newspapers, nationwide, carried The Girls. Several paperback collections have been published. If you never saw these cartoons while they were in the paper every day, you can find and enjoy them online. 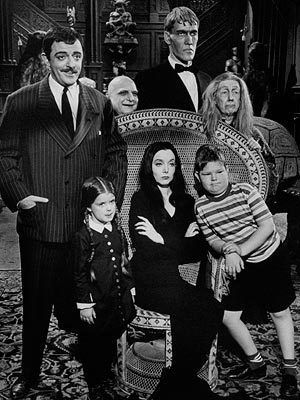 This show was a big hit when I was a kid in middle school: The Addams Family, based on Charles Addams’ weird cartoons.

But I’ll tell you what really made it work; and it’s not what you might think.

They loved each other.

Every member of the family, even the servants, received affection and respect from all the others. Leave It to Beaver gets mocked for idealizing family life. The Addams family had the Cleaver family beat by miles, but never got mocked because they were all so out to lunch. The critics didn’t understand what made the show tick.

The other night I watched an Addams Family episode on YouTube. I enjoyed it every bit as much as I did in seventh grade. Sure, the jokes are easily predictable. That’s what made them so funny! But even more than that, the family feeling shines over the whole thing like the sun.

TV and movies seldom achieve so much.

I remember my father whistling this, and sometimes singing it, while he cut our hair.

Hank Williams scored a hit with Jambalaya in 1952, and it must have remained popular throughout the Fifties or I wouldn’t have remembered it. Every now and then someone else would record it: the Carpenters spring to mind.

Singing about “big fun on the bayou”–I wonder what would happen if anybody came out with a song like that today? Would we suddenly remember that “blameless” and “wholesome” are good things, after all? Or would the wokies shut it down because it’s cis-intersectional or something?

I am so glad I grew up then, and not now.

(Good grief! Look how young Chuck Connors was when he played the Rifleman! I swear he used to be older than me…)

Don’t you wish, sometimes, that someone would come along to clean out the cobwebs?

Just for fun, try counting the number of shots Chuck gets off in 20 seconds. I know, I know, we’re not allowed to talk about guns, we can protect our freedom just as well by engaging in a meaningful dialogue, blah-blah…

But that makes for a really lousy Western. 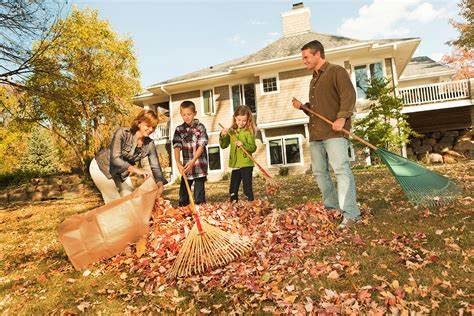 There’s not much left of this year’s autumn, so let’s enjoy it while we can.

Before we stack it on the memory shelf with long-past autumns that we thoroughly enjoyed.

A Day in the Fall, Long Ago

True, our high school football team was astoundingly bad, most years; but we enjoyed the games anyway. And kids and dogs dove into piles of raked leaves.

And no leaf-blowers. They hadn’t been invented yet.