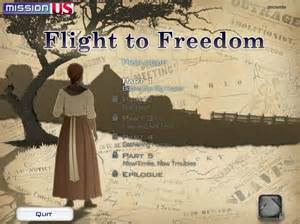 Among the several towering defects of public education is its compulsion to convince America’s children that America is a hellhole of Social Injustice, and certainly not a country worthy of anyone’s respect or loyalty.

So they’ve cooked up this series of online games called “Mission US,” all of them focusing on the sufferings of poor downtrodden minorities at the hands of, well, white people in America, because they want kids to grow up thinking their country really sucks and a place like Venezuela would really be just so much nicer…!

One of these games, “Flight to Freedom,” portrays the evils of slavery, which ended 150 years ago and now only exists where it is practiced by Muslims. But when they brought it into the classroom at Phoenix Elementary School, the lesson backfired (http://www.azcentral.com/story/news/local/phoenix-education/2017/10/10/phoenix-parents-slavery-simulation-game-elementary-schools-unacceptable/751732001/). Parents got terribly upset, claiming that the game is “potentially traumatic” for their children.

One of the accomplishments of the Left’s incessant yawping about slavery is to have made me just not care about it anymore. The Romans enslaved some of my ancestors, and who cares? I mean, why doesn’t that count? Was it just too long ago? Well, then, what is the shelf life of injustice?

There is hardly any group of people on the earth that has not been enslaved at some time or another, and certainly no group–if we insist on talking about groups, instead of individuals–that has not suffered injustice at some other group’s hands. It’s called history: and if God the Father didn’t work overtime to preserve us from our own deeply sinful selves, we’d have no history.

“MissionUS” is nothing more than another tiny cog in a vast injustice-collecting industry run by liberal power-grabbers hoping to grab still more power by fomenting racial discord.

Because if racial harmony were ever allowed to flourish here, they’d all be out of work.

8 comments on “Libs Outsmart Themselves with Slavery ‘Game’”