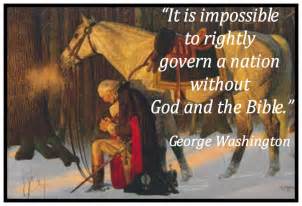 The Church of This World, once attended by President George Washington, who helped found it, has decided to remove a plaque honoring the father of our country (http://www.dailymail.co.uk/news/article-5027503/George-Washington-s-church-remove-plaque-honoring-him.html). The plaque has been there since 1870 and now, suddenly, it’s a problem.

Actually it’s called Christ Church, but I believe in truth in advertising. A church that bows and sways to worldly politics, and rejects its own past in order to curry favor with whoever happens to be top dog today, does not deserve to be called by Christ’s name. Let them be called after the prince of this world, from whom they receive their reward.

Why did they have to get rid of Washington’s plaque? Let them tell it: “The plaque in our sanctuary makes some in our presence feel unsafe and unwelcome.”

Unsafe? Like, George Washington’s gonna jump out from under the pew and drag them off in chains? What bunk. What miserable, pathetic, this-worldly bunk.

As usual, the liberal churches are right in line with those who wish to erase Christianity from America.

These leftids who smear our country’s founders and hate our history, who would shred the Constitution and the Declaration of Independence, who worship no god but themselves, which is just how Satan wants it–what would they put in America’s place? We see what they want to take away. What would they put in its place?

God grant that we never have to find out.

May the Lord rebuke them–but good.