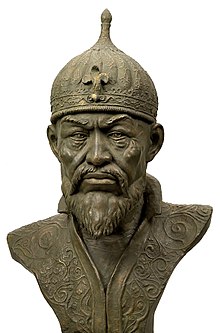 When Tamerlane, aka Timur, died, he had inscribed on his tomb, “When I rise from the dead, the world shall tremble.”

Tamerlane died in 1405, by which time he had succeeded in killing some 17 million people in Central Asia, the Middle East, India, and China–about 5% of the people on the planet at the time. Well, you can’t re-create Genghis Khan’s Mongol Empire without breaking a few million eggs. That Tamerlane’s methods included what we would call extreme sadism did not seem to diminish his luster as “the Sword of Islam.” In fact, he’s venerated today throughout the Central Asian Muslim world–although the descendants of Muslims in other countries that he ravaged are somewhat less than nostalgic for him.

It is a dynamic of history that from time to time a conqueror rises up and tries to devour the human race. Alexander the Great, Pyrrhus, Genghis Khan, Hitler, Tamerlane–and we’re only counting the ones who actually got somewhere. Maybe Napoleon has the excuse that his wars might be called exigencies of self-defense: although that excuse wouldn’t have seemed too convincing while he was burning Moscow.

Dynamics of history don’t go away. People wish they’d go away, people think they’ve gone away: but they remain. Unless history itself ends, somewhere in the future is another Tamerlane. Meanwhile, we have to be content with the present globalist movement–they, too, want to rule the world, but their methods are much subtler than Tamerlane’s.

But there is only One Person who has the right to that throne: Jesus Christ, the Son of God. All the others are usurpers.

2 comments on “A Truly Prolific Murderer”