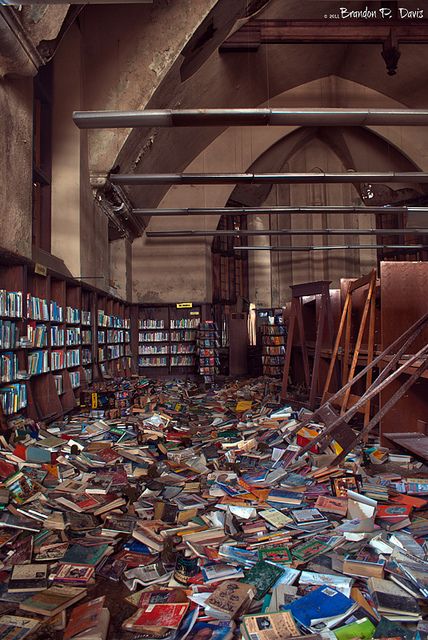 “Books?” said the liberal Eloi. “Yes, we have books! And here they are…”

Someone recently said that liberal ideas make sense to liberals.

That’s because the libs are crazy.

A leftid looks at Detroit–ruined houses, piles of books rotting away in the abandoned library–and says “Yeah, we want that!”

A leftid sees the piles of human feces on the sidewalks of San Francisco and says, “Yeah, we want that!”

He sees the mobs of angry Muslim “asylum seekers” turning Western Europe’s cities into “No Go” zones, and demands the same for America.

A leftid gets jealous if MS-13 hasn’t set up shop in his home state–as long as it’s nice and far from his own neighborhood.

A lefty loon is always “rooting for a recession” so he can blame it on Republicans and get Democrats elected.

A leftid sees young people coming out of college with nothing to show for it but a chip on the shoulder and a mountain of debt, and calls it “higher education.”

A leftid sees people in Venezuela breaking into the zoos and eating the animals because there’s no food in their stores, and says, “Oh, yeah, gimme some of that!”

A leftid sees so-called “students” physically assaulting a speaker, putting on masks and rioting, starting fires and breaking shop windows, and orders the police to stand down.

I could go on, but you get the point: everything that appalls a normal person titillates the liberal. These are, after all, people who insist that there are no moral facts. Give them one small sip of power and they’re roaring drunk, trying to drain the whole jug at a gulp and then reach for more.

America will not be sane until the Left is out of business.

10 comments on “Because They’re Crazy”