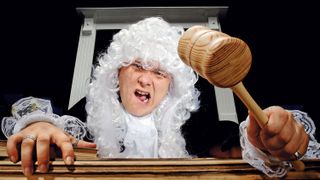 Don’t you just love it when, er, judges really stick it to us? Really smack down common decency in favor of some twisted, bizarre vision of “minority rights”?

A federal judge in Detroit has ruled “unconstitutional” a law against the barbaric practice of female genital mutilation, and dismissed all charges against several defendants (https://www.clickondetroit.com/news/federal-judge-orders-female-genital-mutilation-charges-dropped-in-detroit). The name of this wicked fool is Bernard Friedman, appointed way-back-when by Ronald Reagan.

Attempting to strike a blow for decency, Congress passed a law against female genital mutilation. Several other Western countries have done the same. Most of it is performed by Islamic immigrants from Africa, although the custom is older than Islam and not practiced in other Muslim countries. There is no medical reason for it. It’s just a thing they do to keep women down.

So, lemme see… You can’t pray at a high school football game, and your town can’t have a Christmas parade… but you can cut off girls’ sexual parts because that’s the way they do things in your wretched excuse for a country and just because now you’re over here doesn’t mean you have to give up any of the things you were used to doing over there.

The list of major disservices done to the human race by so-called judges would be a very long one indeed.