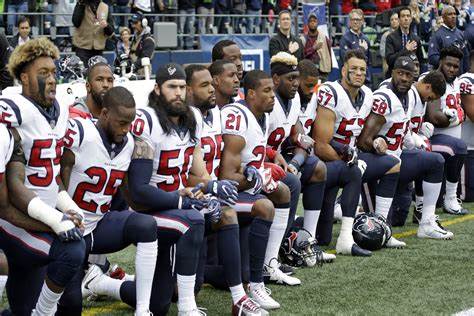 The NFL despises you, America. Can’t you see that?

Almost too disgusting for words.

The National Football League and rap “music” mogul Jay-Z, an oppressed multimillionaire, have formed a partnership to push a “social justice initiative” and “social activism campaign” to–I hope I can type this without throwing up–“nurture and strengthen the country through football and music” (https://www.msn.com/en-us/news/politics/nfl-partners-with-jay-z-to-address-social-justice-issues/ar-AAFLbND).

Jay-Z supports Colin Whatsisname, the washed-up NFL quarterback who says ours is a lousy no-good racist country. Apparently the NFL agrees, although not to the point where they’d take him back. The public wouldn’t stand for it.

But apparently the public’s tolerance for rap “music,” football, and other forms of culture rot is virtually inexhaustible.

Just for the record: There is no such thing as “social justice.” It’s a meaningless left-wing catchword. There can only be justice for individuals, not whole monolithic groups based on skin color, genitalia, or whatever.

Really, how you can support the NFL and still respect yourself… sheesh.

15 comments on “NFL, Rapper, to Partner for ‘Social Justice’”