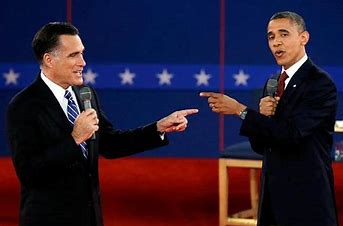 Abbot and Costello were not available.

Later this morning, when I get back from the doctor’s (just a checkup, don’t worry), I want to write about the total lack of seriousnessness with which we go about choosing a president.

I used to cover “town hall meetings,” hundreds of ’em. They are about the best argument against democracy that anyone has ever thought of. These are dog and pony shows, with just about everything set up in advance. That’s why New Jersey resorted to an Open Public Meetings Act, years ago; but all that did was move the choreography from the caucus room to the phone lines.

There are times when I can easily suspect Romney of having lost on purpose. But then he demonstrates what a doofus he still is today, and I realize nobody had to pay him to be a lousy candidate. He just had a natural gift for it.

I have lived in Metuchen, NJ, all my life. I have been married to my wife Patricia since 1977. I am a former newspaper editor and reporter. I was also the owner-operator of my own small business for several years. I wrote various novels and short stories published during 1980s and 1990s. I am a long-time student of judo and Japanese swordsmanship (kenjutsu). I also play chess, basketball, and military and sports simulations. END_OF_DOCUMENT_TOKEN_TO_BE_REPLACED
This entry was posted on Wednesday, December 4th, 2019 at 8:16 am and tagged with 2012 presidential election, NJ Open Public Meetings Act, Obama vs. Romney, politics, selecting our president, town hall meetings and posted in history. You can follow any responses to this entry through the RSS 2.0 feed.
« By Request, ‘Magnificat’
By Request, ‘The First Noel’ »