Two things us deplorables aren’t supposed to have are SUVs and air conditioners, gotta be taken away from us to Save The Planet, don’t you know.

But check out this towering example of Climbit Change hypocrisy perpetrated by Michael Bloomberg in 2012, while he was mayor of New York. Bear in mind that today, as a Democrat presidential candidate, Bloomberg is a Climate Crusader. 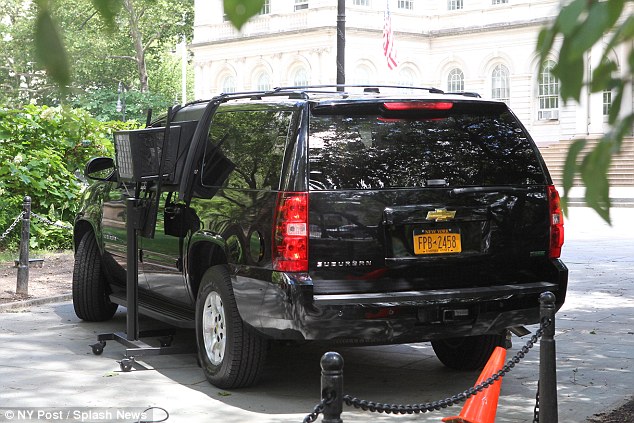 What’s that??? Uh, it’s a black SUV with a wall unit room air conditioner attached to one of its windows. The SUV and the air conditioner both belonged to Mayor Bloomberg, well-known for his intense dislike of heat ( https://www.dailymail.co.uk/news/article-2165728/Environmental-Warrior-Mayor-Bloomberg-cools-SUV-wall-unit-AC.html).

This caper didn’t get a lot of attention in 2012, but now that Bloomberg has spent literally hundreds of millions of dollars trying to land the Democrat presidential nomination, and passing himself off as planet-saving climate warrior, photos (like the one above) and videos have resurfaced. Along with a lot of peeyabbah about how actually this pumped out less carbon than just running the AC that came with the car. It seems the one in the car just wasn’t good enough for Mayor Mike.

Two hypocrisies for the price of one! Why wasn’t he just peddling a bicycle down the street, and fanning himself with a recycled piece of paper?

How many times do we have to say this? Every last one of those elite Climate Change alarmists behaves as if he doesn’t believe a single word of the schiff he’s selling us. The whole thing’s just a power grab, with visions of a global government, owned and operated by themselves at our expense, dancing through their heads.