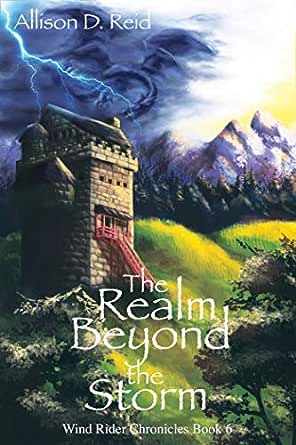 We know Allison D. Reid as “Weavingword,” a long-time member of our blog community, and this is Book 6 of her “Wind Rider Chronicles,” The Realm Beyond the Storm. I’m going to review it for Chalcedon, but I wanted to do it here first–warming up to the task, as it were. And Christian fantasy writers need our support!

This is her best book so far. It features a very strong climax, laden with suspense, and is infused with the wisdom of the Scriptures: the alert Christian reader will find many echoes of the Bible. Another plus is her intimate study of medieval life and culture, which serves to make her fantasy world convincing.

The continuing story in the series is a war launched ultimately from Hell, with plenty of human servants who think they’ll profit by it (sound familiar?), and the travels, toils, and perils experienced by God’s servants. The chief protagonists are three sisters: Morganne, a scholar and a seamstress; Elowyn, an eccentric middle child who may turn out to be a prophet; and Adelin, who was still a baby when the series started and has yet to grow into any definite role. But I have a feeling that she will.

These are believable and sympathetic characters, each with her own voice and her own part to play, with none of the usual and mostly unbearable fantasy cliches attached. Allison has a gift for making her characters come alive. As I read, I can see and hear them as if they were characters in a movie playing in my mind. I do love it when that happens.

Don’t ask me to summarize a plot that has taken six books to present, so far. Suffice it to say that the war’s stakes are the survival of the human race and maybe even Creation itself. There are supernatural forces at work throughout, some for good, some for evil. And let me say there’s at least one major and unexpected plot twist that has me eager to find out what happens next.

Allison’s Wind Rider books are available on amazon.com. They’re self-published, but don’t let that put you off. I root for the day that sees them professionally published for a bigger market. Which they deserve.

18 comments on “Book Review: ‘The Realm Beyond the Storm’”