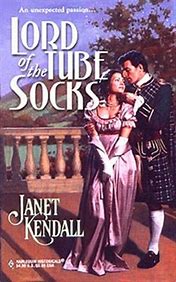 (Editor’s Note: We couldn’t use this cover last week because people wrote in to say they thought the man in the tube socks was Sargon of Akkad. The management regrets the confusion.)

Introducing Chapter CDXXIV of her epic romance, Oy, Rodney, Violet Crepuscular shares a letter from a reader: “Phoebe, writing from a place in  Ohio that I have promised not to mention, wishes my book would feature a paranormal romance. What a coincidence! I was only just saying, to myself and to my neighbor, Mr. Pitfall, that this book needs a paranormal romance almost as much as I do!”

To this end, she introduces the mysterious and vaguely threatening Woman in Moldy Knickers, who haunts the tool shed on the grounds of Coldsore Hall. Her ghost was supposed to have been laid to rest 500 years ago by a man who looked like Lee J. Cobb. But now the sorcery of Black Rodney has brought her back. You could look it up.

Her purpose seems to be to seduce Lord Jeremy Coldsore into a relationship that is something other than wholesome. He first sees her floating past his bedroom window, softly tapping on a set of bongo drums and grinning like a queen of Elfland.

“Forsooth!” he circumvallates. “Margo, Schmargo, I’m in love! Who is this glorious creature that floateth past my bedroom window?” He goes into a regular theme song which I will not attempt to reproduce.

“Will this destroy his chances of wedding Lady Margo Cargo?” Violet challenges her readers. I thought she was supposed to write the book. Is it fair to lay this burden on the reader? “Be sure the next chapter will include the most dramatic expostulations I can find!”