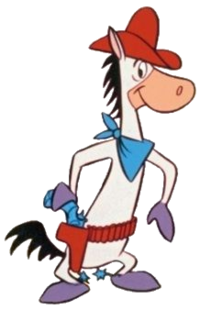 If you’re much younger than me, you might not recognize this cartoon character, Quick Draw McGraw, which ran on TV in 1959-1961. I used to watch it. Kids watched a lot of cartoons in those days.

As you can see, Quick Draw McGraw is a horse. That doesn’t stop him from riding a horse (Doh!) or riding in a stagecoach drawn by horses. I never questioned this at the time, although I did wonder why Goofy could talk and wear clothes, but Pluto couldn’t.

But what would the other horses think of having to lug around this gun-toting, hat-wearing, talking horse whose hooves functioned as hands? Is that quite fair?

Quick Draw was a sheriff (!). usually accompanied by his deputy, a burro named Babalooey who wore a sombrero and spoke with a Mexican accent. [Gasp! Break out the smelling salts!] Imagine getting arrested by a horse and a donkey. It would be even more unnerving if they talked.

Even more baffling, what has caused me to remember this? It’s not like I hear people going around saying, “Hey, remember Quick Draw McGraw?” I’ll bet I’ve gone at least 50 years without hearing his name mentioned even once.

Memory Lane is a street that always gets longer.

24 comments on “The Things One Remembers!”